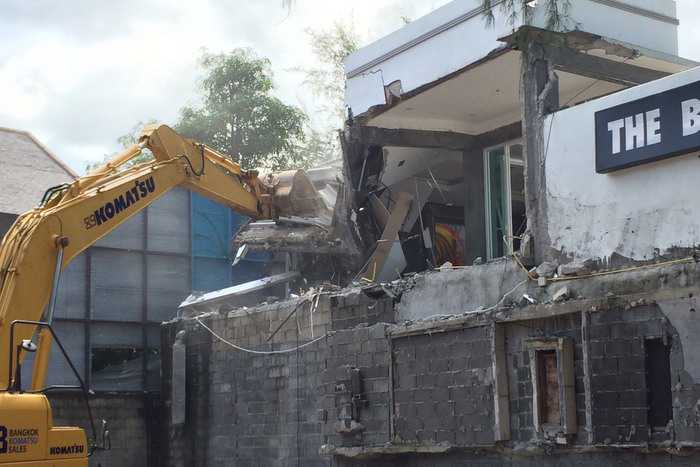 PHUKET: The owners of The Beach Club restaurant in Nai Yang are facing charges for obstructing officers after they tried to prevent the demolition of their building yesterday – deemed illegally built on public land last month.

Owners Aroon Prewphanchoo and Sanya Trirongthong parked a 10-wheeled trailer and several cars in front of their restaurant before officials from the Sakoo Tambon Administration Organization (OrBorTor) turned up for yesterday’s tear-down.

“The Beach Club was scheduled to be torn down by its owner seven days after the court’s decision, which should have been done by December 4, but they refused to take action,” said Surin Yotharak, vice president of the Sakoo OrBorTor.

“This is why we had to take matter into our own hands.”

Sakoo OrBorTor had to call in police and Navy backup in order to have the vehicles towed away from The Beach Club.

Once the vehicles were towed, and taken to the Tah Chat Chai Police Station, backhoes could move in, confirmed Mr Surin.

“Our actions followed the law and all regulations. Unless there are new orders from the court, we cannot allow the building to remain on public land,” Mr Surin said.

Sompop Choosorn, head of the Civil Engineering Department of the Sakoo OrBorTor, confirmed today that the OrBorTor have pressed charges against Mr Aroon and Mr Sanya for obstructing officers carrying out their duties.

However, The Beach Club owners argued that they blocked the demolition because they questioned the legitimacy of the process by which Sakoo OrBorTor officials deemed their building illegal.

Mr Aroon told the Phuket Gazette that he had filed a complaint with the Administrative Court regarding the official’s actions, and that a court date was set for today, December 9.

“We parked our vehicles there because we wanted the Sakoo OrBorTor to wait a little longer for the Administrative Court to hear our case and make a decision,” he said.

“If everything was carried out legally by the Sakoo OrBorTor and if our buildings are actually illegal, we would have torn them down ourselves.”

Phuket Vice Governor Somkiet Sangkaosuttirak issued the December 8 demolition deadline at a meeting on November 27, when he explained that the Court of Appeal had dismissed the owners’ attempts to preserve their place on the sands (story here).

The owners had previously managed to wrangle a stay of execution from the Royal Thai Army earlier in November, when the military personnel first arrived in force to demolish the buildings (story here).

However, that stay was repealed, and the Sakoo OrBorTor confirmed with the Office of the Council of State that the local authority had full rights to demolish the buildings once the owners’ appeal had been dismissed.