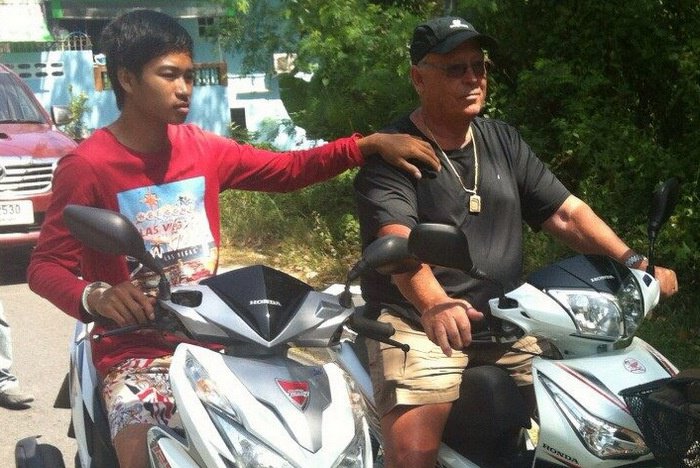 PHUKET: Police in Karon Tuesday took only 24 hours to track down and arrested a 21-year-old man and his 13-year-old accomplice for a snatch-and-run that relieved a tourist of his 38,000-baht gold necklace.

Danish national Preben Andersen, 66, told police that he first noticed two youths following him from Karon Circle, as he and his wife rode their motorbike to the popular Karon View Point lookout on Phuket’s southwest coast.

“But he thought it was just a coincidence,” said Karon Police Deputy Superintendent Pachai Matthayan.

The youths struck about 500 meters south of the viewpoint.

“The driver reached over and ripped the necklace from Mr Andersen’s neck, then sped off,” explained Lt Col Pachai. “Mr Andersen gave chase, but failed to catch them.”

After the Andersens reported the robbery to police, officers identified the two suspects on CCTV footage from cameras in front of the Kata-Karon Municipality offices.

“The officers quickly tracked down and arrested the pair in Patak Soi 22, Karon, where they were hanging around with other youths,” Col Pachai said.

The Honda Click motorcycle used in the crime, identified by its license plate, was also seized in the arrests, he added.

“Nawamin Daicharoensuk, 21, confessed that he was the driver who snatched the gold necklace,” Col Pachai said, adding that the 13-year-old minor was an accomplice to the crime.

“They have both been charged for the theft,” Col Pachai said.

Officers escorted Nawamin to his house, which is also in Patak Soi 22, to recover the gold necklace, which was returned to the Mr Andsersen yesterday.