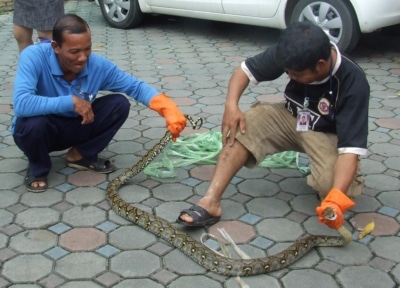 PHUKET: A large python was captured at Vachira Phuket Hospital this morning, biting one of its captors during the struggle.

A staff member of the hospital’s X-Ray unit was shocked to discover the snake in an enclosed grassy area of the hospital at 9am and called in Phuket’s snake catchers.

A team of five snake men, including Environmental Health officer Umnaj Paikong, promptly arrived on the scene to bag the reptile.

The snake bit Mr Paikong’s leg during the capture, leaving puncture wounds on the man’s right shin. However, Mr Paikong said the bite was ‘just a small one’ and that he was not worried about it as the python was not venomous.

Despite being on the grounds he did not seek treatment at the hospital.

Mr Paikong said the snake was a young reticulated python male, measuring at least two meters in length, and will either be released into the wild or taken to a local zoo.