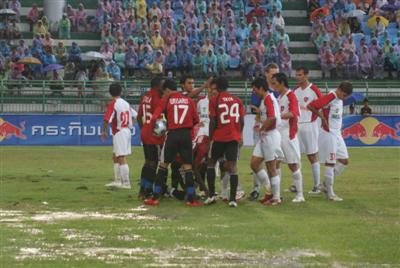 PHUKET CITY, PHUKET: Former Manchester United and England star Bryan Robson made a winning start as the Thai national team manager with a 2-0 win over Yadanarbon FC of Burma at a wet Surakul Stadium last night.

Following a goalless first half, two headed goals in the second half were enough to seal a comfortable victory and a place in tomorrow’s Red Bull Phuket Kata Group Cup final.

Torrential rain had earlier fallen on Surakul, leaving the pitch in an appalling state. It grew steadily worse as the evening went on.

With all of Thailand’s overseas players absent and other regular starters on the bench, Robson’s inexperienced side made a nervous start, almost conceding a goal in the opening moments.

A series of Yadanarbon corners put the home side under pressure and the visitors should have taken the lead, but the Burmese striker failed to hit the target with a header deep within the six-yard box. This was much to the dismay of a large and highly vocal crowd of Burmese that turned out to cheer on their compatriots.

Once Robson’s ‘Thailand XI’ settled they started to play some good football, despite the state of the pitch.

Their best chance in the first half came following a quick raid down the right.

The ball was whipped into the box and fell to the feet of a Thailand striker in the penalty area.

The striker controlled the ball 10 yards from goal, but hesitated long enough to allow the keeper to make a desperate save.

Finishing the half in control, the Thais pushed on after the break.

They were rewarded when center back ‘Mai’ rose unchallenged at the far post to plant a header past the keeper following a corner from the left.

Robson’s side began to dominate possession, but they were almost made to pay for their poor finishing when Yadanabon missed a great chance to equalize following a lightening counter attack.

With time slowly running out, Robson’s side grabbed the crucial second when number 14, ‘Em’, glanced a header into the bottom left corner off a corner kick.

Speaking after the match, Robson expressed his delight at how his side had played given the conditions.

“I thought there were some good performances from some of the younger boys, especially the goal scorers Em and Mai,” he said.

“Attacking wise, we played some good one-twos, some great diagonal balls and created some good chances on top of the two goals we scored. That was very pleasing.”

The Thailand XI move on to tomorrow’s final at 7pm, while Yadanabon will face Muang Thong United in the third/fourth place match at 5pm.