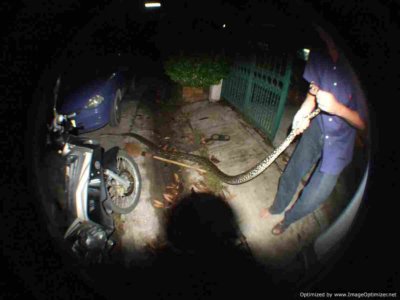 PHUKET: A 12-foot python attacked a Phuket-based jewelry designer when he returned home to find the aggressive snake outside his front door on Wednesday night.

Expat resident Daniel Clark said he and a friend fought with the snake for about two hours, fending it off until they were able to wrestle it to a nearby clearing at Ao Chalong Country Home Village.

His account is the most recent in a series of email and text messages to the Gazette following our report of a python attack at Vachira Phuket Hospital on Wednesday morning.

“I came home from a late-night celebration at 3am on Thursday and the snake attacked me when I tried to enter my driveway,” said Mr Clark.

He said he managed to fend off the snake with a stick but it wouldn’t leave his car port so he called neighbor Neil Skeldon to help.

The snake continued to coil and lunge at the pair, eventually taking refuge under Mr Clark’s car.

Not wanting to risk another encounter with the snake in the morning, Mr Clark dragged the python out from under the car.

“I didn’t want to harm the snake, and I have friends at home who handle their pet python. We eventually managed to drag it to a clearing at the end of my soi, where it disappeared into the undergrowth,” he said.

In addition to the reports from Vachira and Mr Clark, the Gazette has learned of two separate attacks, both on women in Rawai earlier this week; an attack on a Thai man in Chalong last night; and an encounter by PGTV producer Marc Mulloy at his home, also in Chalong, early this morning.

Mr Mulloy said that his dog had come under attack and was barking fiercely at about 2am today. He said he had to drive away, with a stick, a reticulated python of “at least 12 feet long,” and that after about 20 minutes the snake finally abandoned the contest by scaling up and over a two-meter-high wall.

Reticulated pythons, a native variety commonly found throughout Southeast Asia, are recognizable by the strikingly colorful geometric pattern along their backs.

They are known as one of the world’s longest snakes, measuring 25 feet or more and weighing about 300 lbs when fully grown.

Snake experts characterize them as docile, non-venomous reptiles which are not usually aggressive unless threatened. They are powerful and prey on small- to medium-sized animals such as cats, dogs and pigs, constricting and crushing them to death.

One snake expert, Phuket Ruamjai Rescue Foundation chief Saiyan Thamaphan, told the Gazette that he felt ongoing human encroachment on the natural habitat of snakes was the reason for the marked rise in reports of snake attacks and sightings in Phuket.

“When Phuket was less developed, snakes such as pythons and cobras used to appear only at the end of the dry season, normally in April, but that people are now encountering them throughout the year, especially near construction projects,” he said.

He added that the reptiles are very sensitive to noise and vibrations from construction work.

Residents are also encouraged to report snake encounters to the Gazette’s News Desk by emailing editor@phuketgazette.net or calling 076-236555. The newspaper is currently attempting to create a map of locations on the island where encounters are most likely.

Phuketians turn out for mass show of national pride