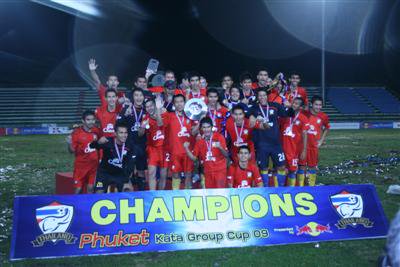 PHUKET CITY: Bryan Robson made a winning start to his career as Team Thailand boss, his side storming back from two goals down to lift the Red Bull Phuket Kata Group Cup trophy after a nail-biting sudden death penalty shootout.

With the game level at 2-2 after 90 minutes, Robson’s side successfully converted all seven of their penalty kicks to lead 7-6, before Vietnam’s Hoang Anh Gia Lai missed their seventh to hand Thailand the cup.

With rain falling earlier in the day, the sloppy state of the Surakul Stadium pitch made life difficult for both sides.

Despite the conditions, the visiting side from Vietnam made a lightening start, racing into a two-goal lead within 20 minutes.

The first goal was surrounded by controversy, as a Thai defender was clearly fouled in the build up.

There were no complaints about the second goal, as a nice passing move between the V-League side’s attackers was finished off by Brazilian striker Esvaldo.

Although stunned by Hoang Anh Gia Lai’s quick-fire double, Robson’s Thailand side remained composed and slowly began to work their way back into the match.

As the first half drew to a close, Thailand managed to claw back a goal following a dreadful mistake from the Hoang Anh keeper.

Boosted by the late goal and some stern words at half time by Robson, Thailand came out flying in the second half and leveled the scores within 10 minutes of the restart.

Thailand number 14 ‘Em’ continued his fine form in the tournament, tormenting the Vietnam leftback before delivering a dangerous cross into the box that was turned in at the near post.

Parity restored, Thailand pushed hard for the third goal, but were denied by a combination of good goalkeeping and woeful finishing.

With neither side able to find the winning goal, the match went to penalties.

Thailand team held their nerve under the pouring rain to lift the trophy.

In the third place match, Thai champions Muang Thong United made amends for their disappointing loss on Tuesday, recording a comfortable 4-2 win over Yadanarbon FC of Burma to take third place.

After the match, Bryan Robson said he was pleased with the character his side showed after conceding the two early goals.

“We started the game a bit slow, which was disappointing. But I thought the performance in the second half was excellent,” he said.

“The attitude and character they showed to come back from 2-0 down was great and really we should have won the game in normal time.”

It was a good result for the Thai side after some less-than-impressive performances at Surakul, such as the heartbreaking loss to Denmark in the final of the Suzuki Cup in January.

Turnout for the charity event was disappointing however, with only about 1000 people braving the rain for the final.