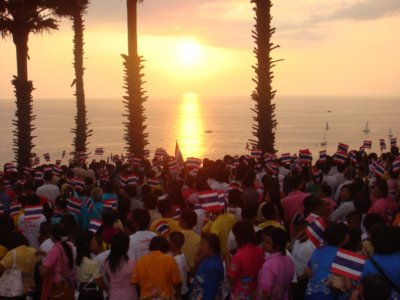 RAWAI, PHUKET: Thousands of flag-waving Phuketians braved the threat of rain yesterday evening to join the nationally-televised singing of the Thai National Anthem at Phromthep Cape.

Phuket Governor Wichai Phraisa-ngop and his wife Thaisika led the stirring rendition, with about 10,000 people and a school band lending support.

Yachts and a Royal Thai Navy vessel Bang Prakong from the Navy base at Thap Lamu in Phang Nga anchored off the Cape followed by sounding their horns at the conclusion.

Timed to coincide with the 6pm sunset, the singing actually took place in twilight.

“The sunset was okay. The sun came out at the last minute, just before six o’clock,” said one observer.

Some light drizzle and blustery winds in the final minutes of the run-up to the singing led many in the crowd to think some sort of ‘guiding hand’ had kept the rain at bay.

One expat resident who attended said: “This was really pretty awesome. I have seen many of the anthem-singing events staged in other provinces and they were pretty lame – just the governor and a small crowd of people in front of a drab provincial hall.

“This was very well staged. There was a great turnout, the weather really co-operated and the sunset did not disappoint,” he said.

“The traffic coming in wasn’t as bad as I expected, but I expect the people using the shuttle service back to Nai Harn Lake had to wait quite a while”, he said.

The singing was part of the government’s Thai Khem Kheng (strong Thailand) campaign initiated by the Finance Ministry to build national unity.

In alphabetical order, each of Thailand’s 76 provinces takes part in a nationally-televised singing of the anthem. Tonight’s event will take place in Maha Sarakham province, which comes after Phuket in Thai alphabetical order.

A PGTV video of the event can be seen here.