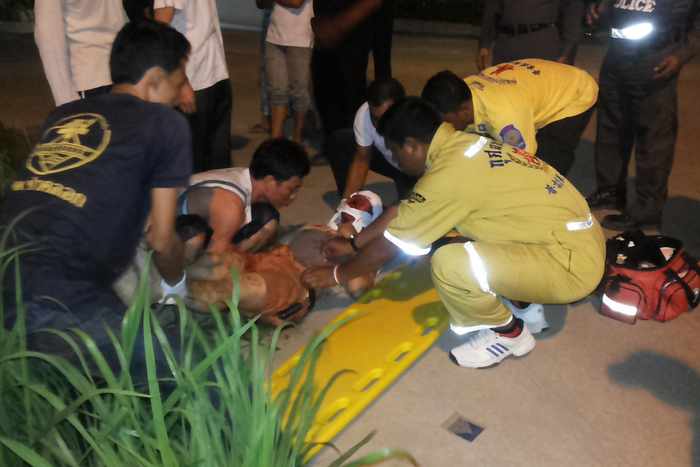 PHUKET: A Chinese tourist was badly injured after he dozed off and drove his motorbike into a roadside ditch in central Phuket early this morning.

Rescue workers and officers from the Thalang Police were called to the scene in Pa Khlok at about 1:10am, where they found a helmet-less Zhong Li Fong, 38, lying in a one-meter-deep ditch.

Mr Zhong’s friends told police that the three Chinese tourists were riding from Patong to their residence in Baan Yamu when the accident occurred.

“Mr Zhong’s two friends were following behind him riding on a second motorbike when they saw him drive straight into the ditch without braking,” Lt Col Yongyuth Kongmalai of the Thalang Police told the Phuket Gazette this morning.

Alcohol was not a factor in the accident, Col Yongyuth confirmed.

“We believe he dozed off while driving, as it was late at night,” he said.

Mr Zhong was initially rushed to Thalang Hospital, but due to the severity of his wounds he was later transferred to Vachira Phuket Hospital in Phuket Town for further treatment.

“Mr Zhong is safe and doing well. We will question him about the accident once he is discharged,” said Col Yongyuth.