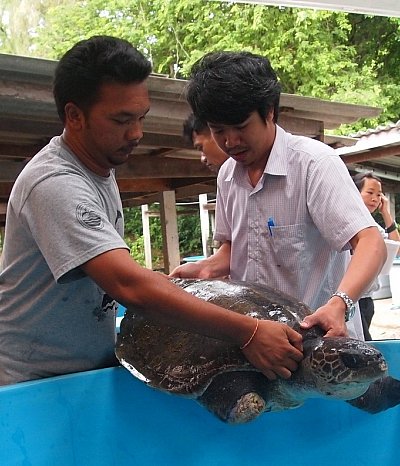 PHUKET: The six Olive Ridley sea turtles that were found washed ashore on beaches in Phuket and Phang Nga on Tuesday were almost all suffering serious injuries from encounters with fishing equipment.

Dr Kongkiat Kittiwattanawong, who heads the Endangered Species Unit at the Phuket Marine Biological Center (PMBC), told the Gazette that the beachings were due in part to strong monsoon conditions earlier this week, which also caused other marine species to wash ashore.

“Some of the turtles have minor cuts on their flippers from fishing nets, others sustained more serious lacerations, some as deep as to the bone. Among the injured turtles is one that had both of her front legs cut off by a fishing net. Another one has a big crack on its shell, which was probably inflicted by a boat propeller,” he said.

Four of the turtles were found on Mai Khao Beach in Phuket, while the other two were rescued from Koh Khao Island and at Baan Nam Kem in Phang Nga.

Olive Ridley sea turtles have not reportedly been seen nesting in any of these areas in the past few years. However, Dr Kongkiat noted that it is currently mating season for the species and that all six turtles found were adult females.

“They usually come close to the shoreline to mate, then lay their eggs between November and January,” he explained.

Dr Kongkiat believes the reason the turtles washed ashore was due to injuries sustained by encounters with fish trawling nets.

“When sea turtles get injured. they can’t dive deep; they must remain near the surface. When they stay too long on the surface, they often get sick. In this state, rough sea conditions can force them ashore,” he said.

From August 26 to 28 more than 10 endangered marine species were found washed ashore along the Phuket and Phang Nga coastlines, including dugong and dolphins, Dr Kongkiat explained.

“The number of injured marine animals that have washed ashore recently indicate that the problem of man-made debris in the sea has reached a crisis point,” Dr Kongkiat said.

PMBC officers have noted that more than 60 per cent of the marine animals that have been washed ashore are injured, most are cut by fishing nets.

“We find that only a very small number of animals that wash ashore are suffering from natural illnesses,” he said.

“Beneath the sea, trash created by human is the most worrisome problem,” he added.

“I think it is time to get more serious about raising public awareness, especially among fisherman, about this problem. No one should throw any kind of trash into the sea, whether it be ripped fishing nets, plastic bags or boat engine oil. In the long term, the problem will affect all of us,” he warned.

“When the turtles swim close to the shore and find net with fish trapped inside, they may swim in to eat the fish. But then they can get tangled in the net themselves and may cut themselves trying to get free,” he said.

Phuket to get new police chief in latest reshuffle

Phuket Sports: Golf round up and Ryder Cup team updates