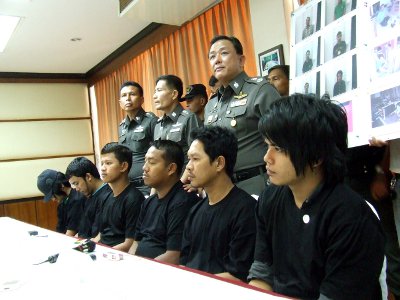 PHUKET: Six staff of the Rachada Pub in Phuket Town have been charged with attempted murder for the stabbing of Sri Panwa Resort General Manager Vorasit Issara early yesterday morning.

In his first major press conference since taking up his position as Phuket Provincial Police Superintendent last week, Maj Gen Chonasit Wattanavrangku this morning presented the suspects to the press as:


All six have confessed that they attacked Mr Vorasit and his associates, Maj Gen Chonasit said.

Also presented as evidence to the media were clothes worn by the suspects and the weapons they used, which included a variety of clubs and cutting instruments, including a home-made axe fashioned from a motorcycle brake rotor.

Maj Gen Chonasit said the fight started after 31-year-old Mr Vorasit dropped a glass on the floor, but no further details were provided.

At this stage of the press conference, one of the suspects began to offer his version of the events that led up to the fight. He was quickly silenced by the new police chief who said the case was still under investigation.

Mr Vorasit’s main injuries were caused by Mr Suchart, who stabbed him in the stomach, and Mr Nareubate, who chopped at his neck with the rotor axe, Maj Gen Chonasit told the media.

Mr Vorasit remains in hospital with serious wounds to the stomach and partially severed neck tendons. He also suffered bruises to his entire body.

Renner stars in the current hit movie Mission Impossible 4 and was nominated for the Academy Award of Best Actor for his role in the critically acclaimed Iraq war movie The Hurt Locker.

The group went to the KorTorMor Pub near Nimit Circle, then another club near Royal Phuket City Hotel before they arrived at the Rachada Pub.

Mr Vorasit, who had been drinking, became embroiled in an argument with the bar staff before he was attacked, the source said.

The incident happened at around 4:30am, several hours past the mandatory closing time for bars.

Maj Gen Chonasit therefore ordered the venue closed for the next sixty days.