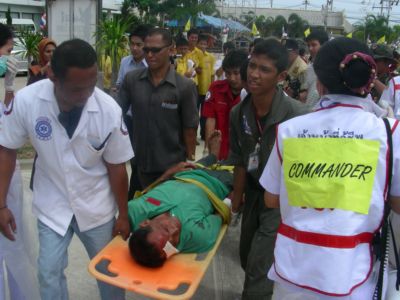 BANG TAO: The tsunami warning sirens at Bang Tao Beach sounded at 10:30 am today in a tsunami evacuation drill organized by the provincial government to ensure local villagers, especially the teachers and students at the local school, are prepared for an emergency.

The sirens were triggered locally for the simulation, which lasted about 60 minutes. School children were evacuated to higher ground and the “mock injured” were processed through triage and taken to emergency first-aid centers set up for the drill.

About 60 students from Baan Bang Tao School ran to the Cherng Talay Tambon Administration Organization (OrBorTor) offices about about 1.5 kilometers away. They were sprayed with water en route to cool them off in the late-morning heat.

The “injured” were recovered by emergency medical personnel in about 10 ambulances and quickly taken to the Cherng Talay OrBorTor office, where they received further treatment from nurses stationed there.

About 125 officers were called on for the exercise, which was led by Cherng Talay OrBorTor President Manote Panchalad and Chotenarin Kerdsom, chief of the Phuket office of the Department of Disaster Mitigation and Prevention (DDPM – Phuket)

One student taking part in the event told the Gazette, “I really didn’t hear any sirens. The staff shouted at me to run quickly to the ‘safe area’ at the OrBorTor office.”

K. Chotenarin was satisfied with the drill. “We successfully evacuated all victims out of the tsunami danger area,” he said.

“We would have liked to see more local businesses joining the exercise. However, we understand that in the low season they have few staff to care for the guests they have; in the high season they are very busy looking after their guests”.

“Regardless, we will ask Cherng Talay OrBorTor to better arrange involvement from businesses later,” he added.

Another tsunami evacuation drill will be held on July 7, he said.

“On July 7, we will conduct a similar drill, but with all 19 tsunami warning towers in Phuket. This time, the evacuation drill will be co-ordinated by the NDWC [National Disaster Warning Center] and will be carried out throughout the Andaman provinces,” he said.