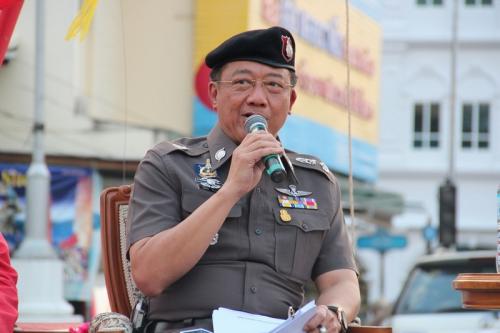 PHUKET: Phuket Provincial Police Commander Choti Chavalviwat is troubled by only a single lingering issue of unfinished business as he prepares for retirement at the end of this month – the much-needed high-resolution CCTVs he sought to bring to the island.

Speaking to the Phuket Gazette, Maj Gen Choti lamented being unable to see the cameras fitted across the island.

“My principal goal as Phuket Police Commander was to make the island a safer place for tourists, and I think I have achieved that. However, I am troubled by the fact that I was unable to bring the 2,000 high-quality CCTVs to the island during my time serving the province,” Maj Gen Choti said. “I asked for them almost a year ago, but it seems like the request was dropped somewhere down the line.”

“Phuket is a tourist destination of global renown, which means so many people come and go that we can’t really keep track of them all. Thorough CCTV coverage is needed on this island,” he said.

“That was an example of how bad it can get. The murder scene was captured on CCTV, but the quality of the footage was of such poor quality that we couldn’t identify the killers.

“Police are continuing to investigate the case. However, it may take a long time for our efforts to yield results because we have to go through what little evidence we have very carefully,” he said.

“Even though we are somewhat lacking in manpower, a lot of big cases have been solved, and we are still working hard on closing others. This makes me proud to be leading the Phuket Police force,” Maj Gen Choti said.

Phuket’s top cop told the Gazette that he welcomed the help and efforts of the Department of Special Investigation (DSI) Organized Crime Center in Phuket.

“Their arrival did not mean that the Phuket police were unable to get the job done,” he said. “We are now working closely with the DSI and assisting them, as needed, with their cases.”

Despite his year of service in Phuket, Maj Gen Choti’s work on the island was never able to replace the satisfaction he had from his previous station in Thailand’s restive Deep South.

“Phuket is good, and the police work hard here. However, I somehow feel closer to Yala and Narathiwat,” he explained

“In the Deep South my team was tackling far bigger problems than anything we’ve faced in Phuket. It was a lot tougher down there – it made much more of an impression on me,” he said.

Maj Gen Choti intimated that he is aware of who was to be named as the new Phuket Police Commander, but was unwilling to reveal the name before the formal announcement on September 26.