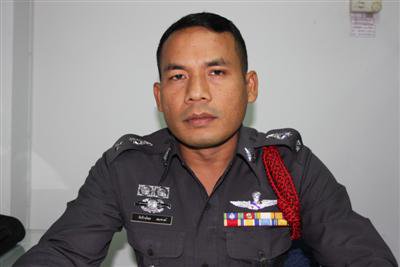 Eric Snyder, 64, of the Jairak Enterprise consulting firm said he paid the money to Marcus Tan for advertising in “Info Phuket“, described as a “business listing and traveler’s guide book”.

The guide was to be launched with a large promotional event on April 12 in Patong.

Mr Snyder filed a complaint with Phuket City Police on March 26 after efforts by his staff to verify the existence of the company failed.

When Mr Tan came to the Jairak Enterprise office in Phuket City to collect artwork on March 30, staff informed the police.

Mr Tan was arrested by police Duty Officer Pitakpol Sompong at around 2pm.

When Col Pitakpol asked to see Mr Tan’s passport, he claimed he did not have it with him.

The passport, later found inside Mr Tan’s bag, had a permit-to-stay that expired in 2006, Col Pitakpol said.

The Singaporean, who denied the fraud charges but confessed to staying in Thailand illegally, is on remand in Phuket Prison.

Mr Tan first contacted Jairak Enterprise with an email in January asking if the company would be interested in being featured in the guide.

Purportedly registered with the Tourism Authority of Thailand (TAT), Info Phuket was to be printed in seven languages and distributed in Thailand, Singapore, Malaysia, China, Japan, Australia and countries in Europe, the email read.

Mr Snyder met Mr Tan and initially paid him 5,300 baht in cash to purchase A4-size ads in each of four issues of the guide to be published in the first year.

On March 23 he paid Mr Tan an additional 20,000 baht after being promised his firm would receive additional benefits, including a listing in the “special features” section of the first issue.

On March 24 he was issued a receipt signed by Mr Tan as well as a “Gary Bernard”, identified as a member of J Vision’s marketing department.

After Mr Snyder discovered that the company’s telephone number and registration number were bogus, he contacted the TAT to verify Mr Tan’s claims of its involvement with the guide.

Officials reportedly replied that they had never heard of Marcus Tan, J Visions, or Info Phuket.

Col Pitakpol said the case is still under investigation and police are unsure whether Mr Bernard actually exists.

Other companies or individuals who have paid money to advertise with Info Phuket should contact the police immediately, he said.

Mr Snyder, who has lived in Thailand since 1975 and speaks fluent Thai, said Mr Tan “seemed like a very nice guy” who gave him no reason to be suspicious. He said Mr Tan may have been a “fall guy” for Mr Bernard or a third party.