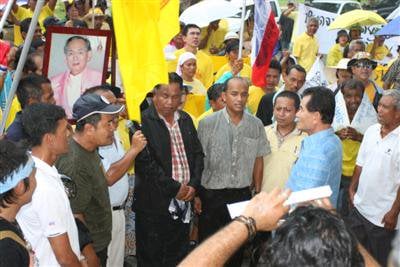 PHUKET CITY: Hundreds of Prem Supporters’ Association members from around the South on April 2 marched through the streets of Phuket City in support of General Prem Tinsulanonda, president of the Privy Council.

Around 300-400 mostly yellow-shirted members of the organization took part in the demonstration, which assembled at Queen Sirikit Park at around 12:30pm.

Some of the protesters came from as far away as Trang, Songkhla and Nakhon Sri Thammarat to show their support for “Pa Prem”, who hails from Songkhla.

The demonstration follows former Prime Minister Thaksin Shinawatra’s accusation that Gen Prem, together with Gen Surayud Chulanont, was behind the military coup of September 19, 2006.

Mr Thaksin made the accusation in a video-link broadcast to thousands of red-shirted United Front for Democracy against Dictatorship (UDD) protesters at a rally outside Government House in Bangkok on March 27.

He called on Gen Prem, a top advisor of His Majesty of the King Bhumibol Adulyadej, to “stop meddling in politics”.

Somchai Yeesun, one of the leaders of the Phuket Prem Supporters’ Association, said, “This will demonstrate our position. We cannot accept the red shirts’ attack on the president of the Privy Council. We want the government to stop the red shirts from using a video link to attack [Gen Prem].”

The protesters marched to Phuket Provincial Hall, where they presented a written statement to Phuket Governor Wichai Phraisa-ngop.

The statement denounced Mr Thaksin, who was referred to throughout as “convicted criminal Thaksin Shinawatra”, claiming that his actions were causing conflict within Thailand.

It called on those with a “just heart” to defend Gen Prem, who it claimed had done much good for Phuket by supporting the tourist industry here. It also praised the general for his policy of leniency towards communist dissidents in the early 1980s, as well as his handling of the 1982 Thai economic crisis.

The statement ended by calling on the government to use strict measures against Mr Shinawatra and his red-shirted supporters “before the damage to the country became more serious”, and pledged to defend Gen Prem “to the last”.

Gov Wichai promised to deliver the letter to the prime minister as soon as possible.