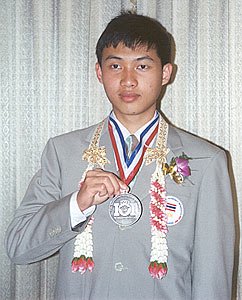 PHUKET TOWN: Phuket student Nawanol Theera’ampornpan returned to Phuket from the International Science Olympiad in the United States today with a silver medal for computer sciences. Nawanol, 18, from Phuket Wittayalai School, was one of four students who represented Thailand in the competition, held in Wisconsin. A student band and about 50 friends greeted him with music, cheers and garlands at Phuket Airport. A total of 75 countries sent representatives to the Olympiad, with 269 students competing in computer sciences. This afternoon he went to Phuket Provincial Hall to meet Governor CEO, Pongpayome Vasaputi, who presented him with a small gift. “I am glad to have won the silver,” Nawanol said. “For two or three months I prepared myself and joined the computer science camp to train. The students in this competition came from all over the world.” He said he had made new friends and enjoyed the activities. “I had a chance to do study tours to many places,” Nawanol said. “There were two days of competition, with three questions for us to solve each day, and I believe that I did my best.” Nawanol’s father, Rungroj Theera’ampornpan, and his mother Nuannoi said they both supported their son’s interest in computers and mathematics, but without applying pressure on him, and advised other parents to take the same approach.