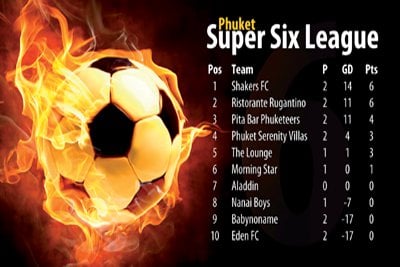 The first fixture saw league leaders Pita Bar Phuketeers and the experienced Morning Star, in their first league outing, play a guarded game that ended with honors divided. After a goaless first half, the Phuketeers found themselves in front after a Morning Star own goal. But midway through the half, a Ratko Privatatno shot was deflected home by Karl Ward to ensure the points were shared.

The evening’s second game was also one of energy versus experience when fourth placed Phuket Serenity Villas (PSV) faced Alberto Mancuso’s Ristorante Rugantino. PSV’s Sascha Wondruschka powered his team into an early lead with a brutal strike that inspired a second half 5-2 advantage. However, it was the PSV team who were left all at sea after a dogged fight-back from Rugantino. Having levelled the scores at 5-5 in the last 10 minutes, Rugantino showed the PSV young guns no mercy to rip the win and the points from their grasp in the dying minutes.

Babynoname continue to prop up the table following a second defeat, this week by the Billy Chima managed Lounge outfit. A tentative early start from both teams soon gave way to The Lounge gaining the upper hand with goals from Kyrre Amundsen, Hand Egil Hjortdahl and Kyle Parsons. Babynoname’s frequent pressure was rewarded with three goals, but never amounted to a serious challenge.

League leaders Shakers FC were almost tempetd into complacency when they played Eden FC in the evening’s final match. A heavy defeat in their first league match seeemed to have encouraged the Eden players and they were intent on making life difficult for Shakers. Unfortunately, their efforts proved fruitless in front of goal and Shakers expelled Eden with a 7-0 drubbing that included a hat trick by the talented Axel Jehangir Stevens.