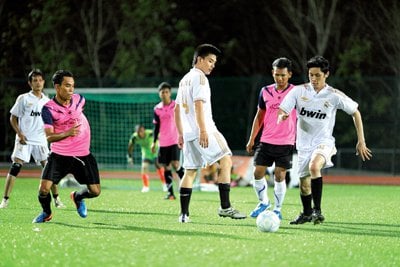 Jitjongrut took on a struggling Honda in the evening’s first Premier Division fixture, well aware that the game was a good opportunity for them to climb up the table with a likely win. Attacking Honda’s backline ruthlessly, Jitjongrut found the net four times to wear down the opposition’s resistance, who produced but one consolation goal. Jitjongrut v Honda: 4-1.

In Division One, SGS played Island Boys with both teams aiming for a win to get their season rolling. Island Boys were first out of the traps when they took the lead midway through the first half and that slender advantage looked as though it would endure into the break, but a quick break from SGS a minute before half-time brought the teams level.

A second-half stand-off lasted for 10 minutes until SGS erupted into the lead with two goals in quick succession. SGS closed the shop doors and fended off the Island Boys attempts to loot a response. With six minutes remaining, Island Boys snatched a goal to encourage SGS out of their defensive stance and as a result were able to score a fourth goal on the counter-attack to secure the points while their opponents hunted for an equalizer. Island Boys v SGS: 2-4.

The Premier Division fixtures concluded with Thalang Tigers up against title contenders Thanachart Bank. In a close match between two typically fast attacking teams, both created plenty of chances but found their respective goalkeepers in scintillating form. However, five goals were posted with Thalang Tigers scoring twice and Thanachart Bank scoring three to win and maintain pressure on the league leaders, Portrait FC.

Ultraman and Chevrolet played out Division One’s last game that only sparked into life three minutes before the break when Chevrolet scored from a free kick. That lead vanished in a flash with a double quick response from Ultraman to give them a 2-1 lead at half-time. Ultraman extended their lead in the 24th minute as Chevrolet fought for a reprieve, but no more goals would come for either team. Ultraman v Chevrolet: 3-1.

Shakers and Rugantino in the mix for Phuket Super Six