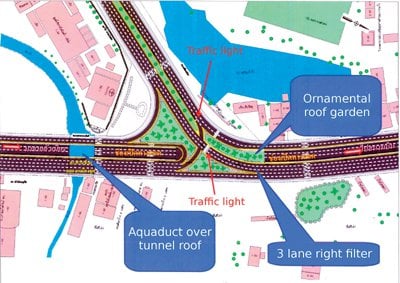 Phuket: Highways Department officials last week presented to local residents their preferred option for a two-lane underpass at the Bang Khu Intersection, north of Phuket Town. The news received mixed reviews, as the initial proposal was to build a flyover at the busy junction, which handles nearly all traffic to and from the airport.

Krabi Office of Highways Deputy Director Lerd Padchawee chaired the public hearing at the Boat Lagoon Hotel conference room. It was the second meeting with local residents to gather feedback on their perceptions and input on the project.

At the first public hearing, held in August last year, the idea of an overpass being the solution was discussed. However, following research, an underpass is now the favored plan.

Weerawat Deeprasertwong, project manager of consulting firm Epsilon Co Ltd, explained, “We came up with six designs, including overpass and underpass options. In the end it was an underpass design that best met all criteria and scored much higher than the others.

“A two-lane underpass is the preferred design. It’s the perfect solution for heavy traffic,” he said.

“Vehicles heading southbound on Thepkrasattri Road towards Patong will follow the curve right to traffic lights at the Bang Khu Intersection with the bypass road.

“Vehicles from Patong on the bypass road travelling to Phuket Town, will also have to wait for traffic lights before turning right and following the curve onto Thepkrasattri Road,” he said.

“The underpass will be straight along Thepkrasattri Road and used by traffic going from Phuket Town to the airport.

“Vehicles from the airport heading to Phuket Town will use the straight road at street level with no traffic lights,” he added.

“The underpass will be open to allow as much natural light as possible. The section covered by the road will be permanently illuminated.

Kuakiat Jitkua, president of the Koh Kaew Tambon Administration Organization (OrBorTor) voiced his concerns over the siting of the project. “Why build the underpass at that intersection. The worst area for traffic on Thepkrasattri Road is the Koh Kaew Intersection [the next set of traffic lights just north of the junction]. Will you consider building one there too?

“Also, will you allow motorcycles to also use the underpass?” he asked.

“It could be very dangerous.”

In response, Arun Sanae, chief of the Highways Department Phuket Office, said the study had identified the Bang Khu junction as the priority. “Furthermore, there are insufficient funds to build another underpass,” he said.

“However, I will dedicate one lane for motorcycles to go through the underpass safely,” he said.

“We haven’t decided the exact location for the ends of the underpass or how long the underpass will be. However, the project will budgeted from 400 to 500 million baht,” he added.

Another concern raised was that motorists traveling north through the junction will exit the underpass right where local vendors currently set up a small roadside market every morning. “They have complained that sales have dropped drastically since the Highways Dept marked the curb red and white, as a clearway [no stopping]. Can you at least paint the curb yellow and white to allow temporary parking?” asked Mr Kuakiat.

To this Mr Arun replied, “We will consider providing temporary parking zones along the street.”

He explained that the plans include expanding Thepkrasattri Road to four lanes each way for 1.5km from the Bang Khu intersection to the Koh Kaew traffic lights, which have become notorious for tailbacks, night and day.

However, Mr Arun said that the Koh Kaew lights will stay. “We are looking into how to change the timing in order to minimize the congestion,” he said.

“I also suggest the Koh Kaew OrBorTor provide a special parking lot for the market vendors and their customers,” Mr Arun added.

In closing the meeting, Epsilon consultant Mr Weerawat explained that a third and final public hearing will be held at the Mongkolwittaya School in Baan Sapam, just south of the Bang Khu Intersection, on March 1.

“That meeting will be smaller and will primarily involve food vendors and other local residents directly affected by the project,” Mr Weerawat said.

The project committee will announce the final plan by the end of March, he added.

Shakers and Rugantino in the mix for Phuket Super Six