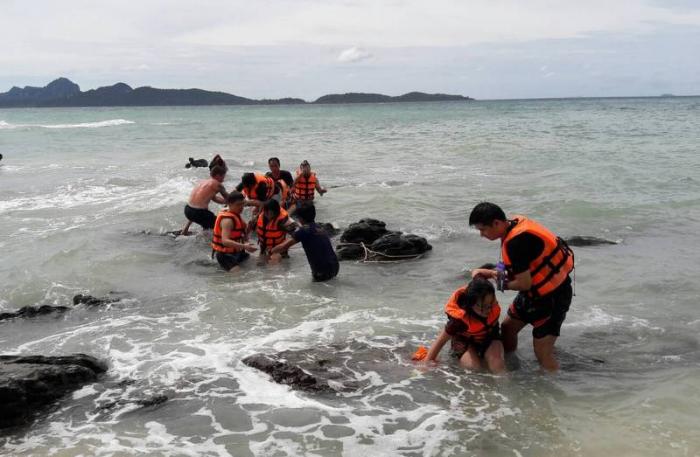 PHUKET: The Phuket Marine Office (PMO) today issued a warning for all boats to proceed with caution and for small boats to not leave shore tomorrow or Saturday, due to large waves and predictions of heavy rain.

Outbreaks of rain spells are expected to ease off in the south by January 8.

Despite daily warnings, small boats have not surprisingly been venturing out to sea. Officials yesterday rescued 28 tourists from two sinking boats in separate incidents as stormy weather and high waves caused the vessels to capsize.

The first incident involved a speedboat called Giant 121 that was carrying 22 Chinese tourists from Phuket to Koh Phai.

“The speedboat driver, named Komkrit Arundetch, said that a four-meter wave engulfed the boat as he was heading toward Phi Phi island (where they were scheduled to stop for lunch), causing the boat to sink and throwing everyone on board into the water,” said Chaiyan Chaikum, an official from Hat Noppharat Thara – Mu Ko Phi Phi National Park.

All tourists on board were reportedly wearing life vests.

“It took 30 minutes to rescue everyone and bring them safely to shore,” Mr Chaiyan added.

The second incident involved a long tail boat called A69 that sank after a large wave caused it to smash into a rock.

All six passengers, who were thrown overboard when the boat crashed, were rescued by a dinghy and safely brought to Koh Gai (Chicken Island).

The PMO monitoring team will issue daily updates in conjunction with the TMD.

Officials are requesting the public to use common sense and avoid taking unnecessary risks during this time, and to follow weather updates closely.