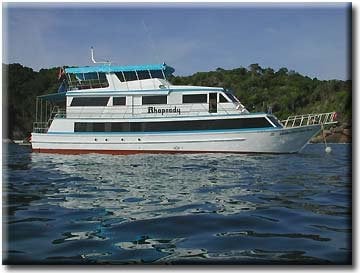 ANDAMAN SEA: Six passengers and seven crew spent around seven hours in the water yesterday morning waiting to be rescued after their liveaboard dive boat sank, apparently without warning and in just six minutes, close to the Surin Islands.

The MY Rhapsody, operated by Kata-based Oceanic Divecenter, was anchored 300 meters from the popular Richelieu Rock just after midnight yesterday morning when some of those on board heard a bang.

Within six minutes, the boat had sunk. The captain managed to send a mayday message and release an EPIRB (emergency position indicating radiobeacon), as crew and passengers grabbed lifejackets and signalling equipment and jumped overboard.

The group, none of whom was injured, used torches and other signalling equipment to try to attract the attention of two other dive boats, which arrived about 45 minutes after the sinking, but without success. They also were unable to alert passing fishing boats until, at 8:15 am, they were finally spotted and rescued.

The 25-meter Rhapsody was three days into a four-day liveaboard trip.

Oceanic Divecenter Managing Director Mona Fristedt told the Gazette today the cause of the sinking was still a mystery. She said, “The boat wasn’t hit, there were no problems whatsoever before this happened … the sea was calm, there was no wind, there were no other boats around.”

Ms Fristedt, who has run Oceanic Divecenter since 2001, said it may become clearer what happened once insurance investigators have examined the boat. “It’s lying pretty deep, about 40 metres, but we’re going to have a look and the insurance company will look too, to see if it’s salvageable,” she said.

Ms Fristedt said she was reluctant to comment further because of the impending insurance investigation. However, in an email released within the dive community she wrote, “This is a boat operator’s worst nightmare. I have to admire our guests for being so calm under such circumstances and, of course, our wonderful Thai crew, as well as the diving staff.”

19 hurt as bus overturns in rain