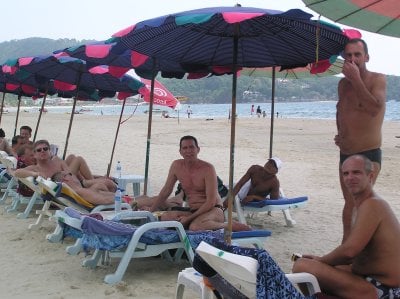 PATONG: The last of the alarms in Patong’s newly-installed emergency warning system was tested yesterday. It emitted a 121-decibel alert that could be heard 1,500 meters away.

The alarm at Phuket Cabana Hotel, connected to 24 loudspeakers, was tested for 10 minutes at 2pm yesterday afternoon.

Installation of the system, which will eventually be linked to the National Disaster Warning Center (NDWC), began on April 4.

Two other alarms, at the Seaview Patong Hotel and the Sunset Hotel, were tested on April 6, and April 8 and 9 respectively.

Patong Deputy Mayor Chairat Sukbal was present when the alarm was tested yesterday. He said he thought the system was working efficiently, but it would be re-tested when it was connected to the Nonthaburi-based National Disaster Warning Center (NDWC).

“Today we have triggered the alarm from the control tower here, but when the link to NDWC is complete, we will have to test it again,” said K. Chairat.

He added that he had had a meeting with the government-appointed tsunami tsar Smith Thammasaroj to discuss the details of the new system, such as what languages warnings would be given in and what kind of information would be given.

K. Chairat said, “The world-class alarm installed in the tourist provinces will give tourists confidence that they are safe when they are visiting us.

“We will follow up the installation by inviting Patong hoteliers and businesspeople to a briefing on procedures for evacuating each part of the town.”

Pat Neeley, Executive Director of Ele Sat Engineering Co Ltd, said he had been confident about yesterday’s trial, after the success of the test at the Seaview Hotel.

He continued, “This system is easy to maintain, and it can be monitored day and night – even via a laptop computer.”