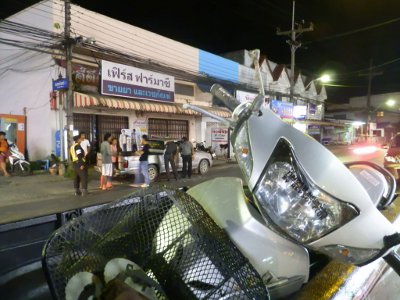 The first incident was an ambush attack in front of the Thepkrasattri Municipal Market, just west of the Thalang Junction on Don Chom Tao Road.

A 25-year-old man identified only as “Pisut” was driving a motorbike along Don Chom Tao Road towards the junction at about 9:15pm when he was shot at from behind.

One of the bullets hit Mr Pisut, entering his right shoulder and lodging at the base of his neck.

Phuket Kusoldharm Foundation rescue workers raced the victim to nearby Thalang Hospital for emergency medical treatment. He was quickly transferred to the better-equipped Vachira Phuket Hospital in Phuket Town, where he died.

Police questioned witnesses at the scene, where a Toyota Tiger pickup parked in front of the Pearl Pharmacy was hit by at least six bullets. One of the slugs shattered the window of the passengers’ compartment of the extended cab model.

Fortunately, the couple who had parked the truck were safely out shopping in the area at the time. No other injuries or damages were reported.

Police questioned witnesses to learn more about the assailants, but people still in the market at that late hour appeared hesitant to talk. All the police managed to ascertain was that there were at least two assailants on a single motorbike who carried out the attack before speeding off.

The Phuket Gazette has since learned the youth was a resident of Baan Lipon in Srisoonthorn subdistrict.

Police at the scene suspect a drug dispute or gang rivalry might have been the motive for the attack, as gang-related youth violence is common in Thalang.

In an unrelated shooting less than an hour later, a computer repair man in Chalong shot his neighbor dead for making too much noise in celebration of Liverpool’s recent win over Cardiff in the Carling’s Cup match, Siangtai Daily reported.

Chalong Police were notified of the shooting at 10:10pm.

At the scene, a row of single-storey rental flats off Soi Palai, they found the body of 46-year-old Suthin Hokmeng slumped over at a table in front of his flat. He died of a single gunshot to the right eye.

Mr Theerapong lived in another flat three units away from where Mr Suthin and fellow Liverpool supporters frequently gathered outside to drink.

He confessed to killing his neighbor in a fit of rage, telling police that despite wearing earplugs he could never get to sleep when the group partied late into the night.

He apparently went into a rage when the deceased chastised him loudly that night about his noisy motorbike, which had a muffler problem.

He approached the group and told them flatly that in the future they would learn to respect their neighbors’ need for quiet at night, and added that he had a gun.

With that he went back to his room, grabbed his Thai-style homemade gun and returned. He placed the weapon at Mr Suthin’s eye and fired at close range, killing him.

He was badly beaten when turned over to police, indicating that neighbors administered some justice of their own before handing him over to the authorities. Police are also in possession of the firearm used in the shooting.