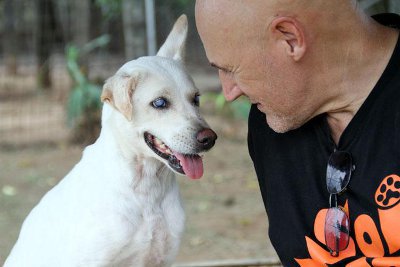 Mr Dalley believes it is the first step in establishing a national organization dedicated to humanely tackling the problems associated with stray dog and cat populations.

“Bangkok has a massive problem but is blessed with a large number of Thai people and groups who are working extremely hard to both find a solution to the problem and provide care for the many injured and sick animals in the city.

“SCAD is a tremendous organization which has achieved a great deal, but it is felt that by integrating with SDF far more can be done than working separately,” he said.

“SDF-SCAD Bangkok will be very much a Thai-run operation with SDF providing the necessary facilities and finance to support them,” he added.

President of the SCAD advisory committee, Annelize Booysen, echoed Mr Dalley’s comments, saying, “Joining forces with SDF is an excellent opportunity to combine our skills and resources to make a real difference in improving the lives of street animals in Bangkok and later in the rest of Thailand.

“SDF has always been a partner to us – albeit at a distance – and we are very proud to be joining them now in the fight for improved animal welfare in Thailand,” she said.

Mr Dalley stressed that this would in no way affect the SDF’s work in Phuket, where an ambitious program to increase sterilizations to 10,000 per year will commence once additional vets and dog teams have been recruited and trained.

“We have now contacted all local OrBorTor [local government authorities] bar one, with a view to establishing full cooperation in instigating local mobile clinics throughout the island over the next two years. All are in favor of this plan, which will commence this summer,” he said.

Mr Dalley said that the increased number of sterilizations will see Phuket’s stray dogs under total control in two years. However, he pointed out that although the number of stray dogs has reduced over the past eight years, the unsterilized dogs are now producing significantly larger litters with a higher survival rate because of the reduced numbers.

“By increasing sterilizations to 10,000 per year we will be able to overtake the birth rate. Once under control, a maintenance operation will be required to sterilize puppies dumped by owners who refuse to have their dogs sterilized, and allow us to focus on new areas,” he explained.

However, Mr Dalley believes problems will continue in Patong unless there is a change in attitude.

“Whilst we focus on the unsterilized dogs the local authority persist in disposing of sterilized dogs rather than allowing them to remain, meaning the problem will never be solved,” he said.

“SDF will not cooperate with Patong OrBorTor [Municipality] while they continue to refuse to admit what they are doing with the dogs being removed,” he stated.

“Their statement that they are taking the dogs to the Government Dog Pound is refuted by the Phuket office of the Department of Livestock, who manage that facility.

“We will of course continue to respond to calls from the general public regarding unsterilized and injured dogs in Patong,” he said.

Mr Dalley also called on the Government of Phuket to impose a ban on the import and sale of non-vaccinated, unsterilized puppies, coming mainly from puppy farms in Bangkok.

He stressed that not only did this pose a risk of introducing rabies to the island, but also exacerbated the stray dog situation as many end up being dumped at temples and on the streets.

“Dozens of puppies crammed into wire cages can often be seen at the cargo terminal at the airport destined for sale at markets and temple fairs. The puppies are generally four to five weeks old and cannot be vaccinated at that age,” Mr Dalley said.

To learn more about Soi Dog Foundation and SCAD see www.soidog.org and www.SCADbangkok.org