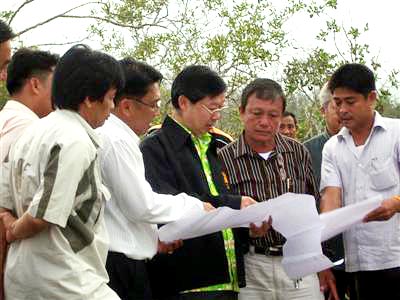 WICHIT, PHUKET: A Senate committee gave its support to Wichit Municipality Tuesday in its bid to secure proper permits for a road and football field it built illegally on mangrove forest land.

Access to the football field, described as a ‘community recreational site’, is via a new dirt road that runs almost half a kilometer along Klong Mudong estuary from Mudong market.

Built by the municipality, the road has sections of concrete drainage pipe beneath it to prevent it from washing away.

The encroachment was first reported in December last year by a private firm which owns adjacent property and reportedly wants to build a resort.

Representatives of Wichit Municipality, including Mayor Kreeta Saeton, told the Senate committee that local residents asked them in March 2008 to develop the site as a community recreation area ‘before it was too late’.

Mayor Kreeta accepted that the municipality hired a private firm to build the football field and the access road without the approval of the Ministry of Natural Resources and Environment (MNRE).

Work on the project, funded by private donations, began in September last year.

The MNRE office in Phuket inspected the area late last year and filed a complaint with Phuket City Police. The Phuket Provincial Office was also informed in writing, but no work stoppage order was ever issued, the municipality said.

Wichit Municipality, which features the Mudong Mangrove Forest Reserve prominently in its tourism promotion campaigns, was only informed of the Senate committee visit late last week.

Mayor Kreeta said “The main reason for the construction project is to preserve this area for the benefit of the community, because we are afraid one day it may be completely surrounded by hotels or resorts and local people will not be able to enter.”

He conceded that the construction was on land designated as protected mangrove forest, but said the area was mostly mud flats with little vegetation.

The municipality surveyed the area carefully to ensure none of it encroached on private land, he said.

“We understand that it’s not legal, but we were afraid that getting permission through the normal process would take too long. By then the land could have been taken over by someone and we would have been out of options,” he said.

Mr Surachai said that since the construction was already a fait accompli, it was up to the municipality to contact all the relevant agencies and ensure that it is legalized.

In its report to the Senate and other agencies, the committee would note that the construction, while not legally authorized, appeared to have been done for the public good.

The MNRE, which is tasked with protecting mangrove forest land, would be one of the agencies getting a copy of the findings, he said.

In the meantime the municipality has agreed to suspend any further work at the site.