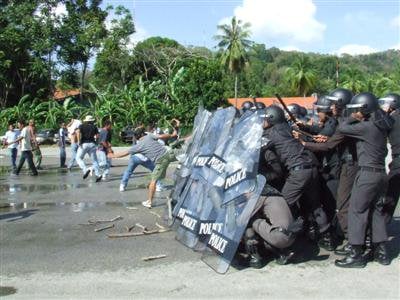 PHUKET: Nearly one-sixth of Phuket’s 1,200-strong police force has been sent to Bangkok to help manage unrest there.

Since Monday, 173 officers with crowd control training have been dispatched from police stations on the island.

Phuket Provincial Police Commander Pekad Tantipong denied the move would have any effect on law enforcement in Phuket.

“The police left here will do their duty. It’s down to the management of each police station,” he said.

Having a lot of officers at a station did not necessarily bring success, he said. “It’s about who’s in charge.”

Maj Gen Pekad said his officers had been spared duty in the capital until now because the island’s force was relatively small.

“They wouldn’t have been sent up there if it wasn’t necessary,” he said. “They have to rotate out police from other places as they’re exhausted.”

Maj Gen Pekad said he didn’t know when the officers would return.

“It’s not just Phuket,” he said. “Phang Nga, Krabi, Surat Thani, Ranong and Nakhon Sri Thammarat were all asked to send about one company of officers.”