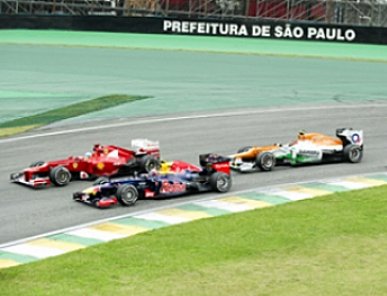 PHUKET: Interlagos was a stunning event with weather changes that kept us guessing to the end. It was thrills and spills all the way, to end one of the great F1 seasons in splendid form.

Sebastian Vettel had a chance to lose the Drivers’ Championship, and it seemed he had done so at the beginning of the race.

Fernando Alonso had a chance to give it to Vettel the way he did in Abu Dhabi in 2010. Neither driver did that. Vettel battled back, and Alonso battled on.

Lewis Hamilton had a chance to leave McLaren on a win; it might be his last chance for a long time.

Then Nico Hulkenberg looked like he would finally make Force India a winner. In the end The Hulk took Lewis out of the race, and we did not get what we wanted to see.

Jenson Button drove excellently to show he can be a No 1 driver, and Felipe Massa also drove brilliantly.

It was bitter-sweet to see Michael Schumacher in his last race, and it was disappointing to see him allow Vettel to pass him so easily. But Schumie never played a correct game.
Button won the first and last races of the season, and one in the middle. He will be humming.

Hamilton left on a low, headed for the outer darkness that is Mercedes. McLaren is looking so strong. Red Bull has a great car, but it was not as strong as McLaren at the end of the year.

Force India has had a technology agreement with McLaren, which has helped them a lot, but that ends this season. So, for next year, Force India has announced a further 50 million pounds sterling investment.That is interesting, given the apparently shaky state of its promoter’s businesses.

Alonso came second but his body language looked as if he had come last. I understand he could hear the Red Bull pits blasting ‘We are the Champions’ above the podium ceremony, which will have hurt. He will be thinking how it might have been if he had not failed to finish in Belgium and Japan.

There will be hard questions at Maranello after being behind Red Bull, McLaren and, in the last couple of grand prix, behind Williams and Force India.

Alonso said: “We were clearly slower than them in pace so this is something we must improve next,” he added, “We can be a little bit slower but not that much and this year it was something strange, combinations that allowed us to fight until the end. But, I’m not sure we’ll be this lucky in the future.”

Next week I shall give a round-up of the season, which was a year of two distinct halves.

But for now it’s a long wait to the next race.

3 cities in Thailand recently joined UNESCO’s membership of so called “learning cities” which are said to promote “lifelong learning” and sustainable development. Chachoengsao, Chiang Mai and Phuket joined the UNESCO’s Global Network of Learning Cities. Altogether, 55 cities from 27 countries, adding up to 230 cities in 64 countries around the world, according to UNESCO.

“These cities are outstanding examples of how lifelong learning can become a reality at local level. They have proven that effective lifelong learning policies and practices can support the development of inclusive, safe, resilient and sustainable cities and contribute to the 2030 Agenda.”

The UNESCO Institute for Lifelong Learning David Atchoarena says the recent new members have shown that they can make “lifelong learning a reality,” even after enduring the pandemic.

“With unprecedented urgency, the Covid-19-19 pandemic has underlined the necessity to build more resilient education systems for the future. With more than half of humanity living in urban areas, cities must be at the centre of this undertaking.”

David says he hopes it will inspire other cities in Thailand to follow.

“I very much hope that we will see many other cities from Thailand joining the network and working on providing lifelong learning opportunities for all to ensure a sustainable and peaceful future.”

The mayor of Chachoengsao, Kolayuth Chaisang, says his goal is to provide “effective education, thoroughly and equally to all citizens.” According to the Bangkok Post, the city is a key urban centre both economically and culturally.

The mayor of Chiang Mai, Tussanai Buranupakorn, says he wants to revitalise the city, while also maintaining the cultural significance. The city has a number of educational institutes, which goes along with UNESCO’s learning city principles.

Phuket is a hub of sustainable creativity, according to the Bangkok Post. The mayor of Phuket, Somjai Suwansupana, says he wants to preserve the city’s “identity, local wisdom assets and the charm of our multiculturalism.”

A newborn baby was found on a bench at a neighborhood by Phuket’s Patong Road. The baby boy was wrapped in cloth and left inside a reusable shopping bag. The bag also had a bottle of milk, diapers and clothing.

A woman walking by early in the morning heard the baby crying. She followed the cries and found the baby on the bench. She called police and calmed the baby, feeding him milk that was left in the bag.

Police took the baby to the Patong Hospital. The baby, about a week old, is in good health, police say.

“Police and rescue workers together rushed to the scene and called Patong Hospital to have a medical team meet us there … This baby is healthy and does not appear to have suffered any injuries. He is now safe and being cared for at Patong Hospital.”

Police are reviewing surveillance camera footage to see if they can track down the mother, or whoever left the baby behind.

Confusion reigns. It was predictable and many people, despite months of warnings, have left their visa extensions to the last minute. Meanwhile Thai immigration don’t appear to be making the process easy as The Thaiger has received multiple comments from foreigners visiting the various immigration offices around the country and encountering ‘local’ applications of the published guidelines and, in some cases, demands for additional paperwork.

A note to The Thaiger, we won’t publish the person’s name, from Phuket where a person applying for an extension to their visa has been given something less than the 30 days promised by the government.

“On Monday Phuket Immigration was only giving 14 day ‘conditional’ VISA extensions from the date of application, not from September 26. They announced this was to allow time to “investigate and verify” the need for the extension.

So basically we paid 1900 baht for a 14 day extension. After announcing this many people left as many que numbers were called and nobody came up. They said if that were the case they would come back later in the week.

So we have to go back on October 5 (or a few days later is ok they announced) to see if we’re approved for the 30 day extension from September 26. If not we would be immediately “overstaying” at 500 baht/day.

Another writer, speaking about the same matter, said that they were still being charged the non-refundable 1900 baht fee for the 2 week extension….

Yesterday a person, who had been living in Bangkok under the auspices of the visa amnesty on a lapsed Non Immigrant B (Business) visa, ended up visiting three different offices to get his paperwork sorted out. This is after first contacting immigration by phone to confirm the particular office to attend. He had a letter from the US Embassy explaining that he would be unable to return to the US at this stage due to lack of flights and the current Covid-19 situation in the US. He made an appointment online, as instructed, and it still didn’t go very smoothly.

The instructions he received….

If your Visa was cancelled during the Covid-19 crisis, and you are currently under the amnesty grace period set to expire September 26, you will need to schedule an appointment online to queue in with the Immigration Division 1 at Muang Thong Thani (near Don Mueang Airport). You will need…

After going to Counter K and Counter J (2 separate buildings), he ended up being asked to go to the Chaeng Wattana office instead, and then was shuffled off to yet another office. Additional paperwork was also requested, beyond what had been asked for. After nearly a full day he ended up with a visa stamp for a 30 day extension in his visa.

He also noted that there is NO ATM around the Mueang Thong Thani immigration offices and our reader had to take a 60 baht motorcycle taxi ride to get cash.

Probably worse, he said that the Immigration officials (clearly overworked at this time), were “extremely rude” and that the facilities (apparently temporary) are “less-than-adequate”, especially the Counter K, which was basically a parking garage with seats… no fans.

Additionally, contrary to the clear advice on the Thai Immigration website, most people getting their extensions were from the date of their visit and NOT the end of the September 26 amnesty.

The moral of this tiny microcosm of stories is that it’s probably the busiest week for Thai immigration in history. The officials will be stressed and stretched, there will be long queues and there will be confusion. We should also mention that we’ve had a few foreigners contact us saying that things went very smoothly for their extensions, so well done to all concerned in those examples!

Be prepared, take ALL your paperwork, expect to asked to produce more evidence, make sure you have all your photos and copies of your passport, TM 6 departure card, plus filled-in applications before you head to the Immigration offices.