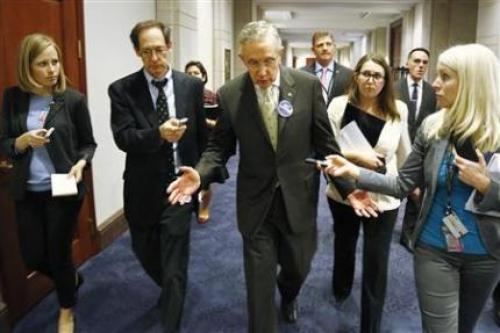 
In first day of U.S. shutdown, no end in sight
Reuters / Phuket Gazette
PHUKET: President Barack Obama and congressional Republicans came no closer to ending a standoff yesterday that has forced the first government shutdown in 17 years and thrown hundreds of thousands of federal employees out of work.

As police cordoned off landmarks like the Lincoln Memorial and government agencies stopped cancer treatments and trade negotiations, Republicans in the House of Representatives moved to restore funding to national parks, veterans care and the District of Columbia.

An effort to pass the three bills fell short yesterday evening, but Republicans plan to try again on Wednesday. They are likely to be defeated by the Democratic-controlled Senate.

The standoff has raised new concerns about Congress’s ability to perform its most basic duties. An even bigger battle looms as Congress must raise the debt limit in coming weeks or risk a U.S. default that could roil global markets.

“This is a mess. A royal screwup,” said Democratic Representative Louise Slaughter of New York.

Obama accused Republicans of taking the government hostage in order to sabotage his signature health care law, the most ambitious U.S. social program in five decades.

Republicans in the House view the Affordable Care Act as a dangerous extension of government power and have coupled their efforts to undermine it with continued government funding. The Democratic-controlled Senate has repeatedly rejected those efforts.

“They’ve shut down the government over an ideological crusade to deny affordable health insurance to millions of Americans,” Obama said in the White House Rose Garden.

Spending authority for much of the government expired at midnight on Monday (0400 GMT), but that did not prevent the Obama administration from opening the health-insurance exchanges that form the centrepiece of the law.

Republicans said Obama could not complain about the impact of the shutdown while refusing to negotiate. “The White House position is unsustainably hypocritical,” said Michael Steel, a spokesman for House Speaker John Boehner.

Republicans said their latest proposal would help elderly veterans who earlier in the day pushed past barricades at the National World War II Memorial to get into the shuttered site.

“They’re coming here because they want to visit their memorial, the World War II memorial. But no, the Obama administration has put barricades around it,” said Republican Representative Mike Simpson of Idaho.

All three bills won support from a majority of the House, but fell short of the two-thirds vote needed to pass under special rules that allow quick action. Republican leaders plan to bring up the bills for a regular vote on Wednesday. Obama said he would veto the bills if they reached his desk.

Democrats said Republicans were avoiding a vote to restore funding to the entire government because they were afraid it would pass.

“That’s important – a park? How about the kids who need daycare?” said Democratic Representative Sander Levin of Michigan. “You have to let all the hostages go. Every single one of them.”

The veterans in question had gotten in to the memorial with help from several Republican lawmakers. But they didn’t seem particularly interested in taking sides.

“It’s just like a bunch of little kids fighting over candy,” said George, Atkinson, an 82-year-old Coast Guard veteran of the Korean War. “The whole group ought to be replaced, top man down.”

The selective spending plan appeared to temporarily unite Republicans, heading off a split between Tea Party conservatives who pushed for the government funding confrontation and moderates who appear to be losing stomach for the fight.

Representative Peter King, a New York moderate, estimated that more than 100 of the chamber’s 232 Republicans would back Obama’s demand to restore all government funding without conditions. That would be enough to easily pass the House with the support of the chamber’s 200 Democrats.

The shutdown closed landmarks like the Grand Canyon and pared the government’s spy agencies by 70 percent. In Washington, the National Zoo shut off a popular “panda cam” that allowed visitors to view its newborn panda cub online. In Pennsylvania, white supremacists had to cancel a planned rally at Gettysburg National Military Park.

Whether the shutdown represents another bump in the road for a Congress increasingly plagued by dysfunction or is a sign of a more alarming breakdown in the political process could be determined by the reaction among voters and on Wall Street.

Stock investors appeared to be taking the news in stride with investors confident a deal could be reached quickly. The S&P 500 closed up 0.8 percent and the Nasdaq Composite gained 1.2 percent.

But the U.S. Treasury was forced to pay the highest interest rate in about 10 months on its short-term debt as many investors avoided bonds that would be due later this month, when the government is due to exhaust its borrowing capacity.

If Congress can agree to a new funding bill soon, the shutdown would have little impact on the world’s largest economy.

A week-long shutdown would slow U.S. economic growth by about 0.3 percentage points, according to Goldman Sachs, but a longer disruption could weigh on the economy more heavily as furloughed workers scale back personal spending.

The last shutdown in 1995 and 1996 cost taxpayers $1.4 billion, according to congressional researchers.

The political crisis raised fresh concern about whether Congress can meet a crucial mid-October deadline to raise the government’s $16.7 trillion debt ceiling. Some Republicans see that vote as another opportunity to undercut Obama’s healthcare law.

Failure to raise the debt limit would force the country to default on its obligations, dealing a blow to the economy and sending shockwaves around global markets.

A 2011 standoff over the debt ceiling hammered consumer confidence and prompted a first-ever downgrade of the United States’ credit rating.

Analysts say this time it could be worse. Lawmakers back then were fighting over how best to reduce trillion-dollar budget deficits, but this time they are at loggerheads over an issue that does not lend itself to compromise as easily: an expansion of government-supported health benefits to millions of uninsured Americans.

Republicans have voted more than 40 times to repeal or delay “Obamacare,” but they failed to block the launch of its online insurance marketplaces. The program had a rocky start as government websites struggled to cope with heavy online traffic.

“What I’m hearing from my constituents at home is if this is the only way to stop the runaway train called the federal government, then we’re willing to try it,” said Texas Senator John Cornyn, the second-ranking Republican in the Senate.

A Reuters/Ipsos poll showed 24 percent of Americans would blame Republicans, while 19 percent would blame Obama or Democrats. Another 46 percent said everyone would be to blame.

Republicans and Democrats traded blame for the shutdown, but many seemed deeply embar