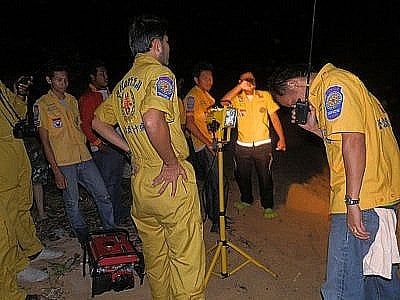 PHUKET: The search continues for a 17-year-old student who disappeared in strong waves at Nai Yang Beach late yesterday afternoon.

Royal Thai Navy officers from the Third Naval Area command in Phuket and Kusoldharm Foundation rescue workers resumed their search for Nithipol Lorlaem at 8am today, after it was deemed unsafe to continue the search around midnight last night.

Mr Nithipol’s parents, Thanti and Nittaya Lorlaem, told rescue workers that their son arrived back home in Phuket from Chiang Mai, where he is a student at Attaqwa School, at 4am yesterday.

He went to the beach with two friends later that afternoon.

One of the friends, Saimarn Manabutr, also 17 years old, raised the alarm after Mr Nithipol disappeared in strong waves in front of the police box near the beach.

Mr Nithipol’s parents received a call from their son’s friends at about 5:45pm, informing them that Nithipol had disappeared.

Rescue workers in the area immediately launched a searchl, but have yet to find him.

Police, Navy officers and rescue workers are continuing their search today in the hope that Mr Nithipol is still alive, but they now fear that the search mission has become a body-recovery mission.