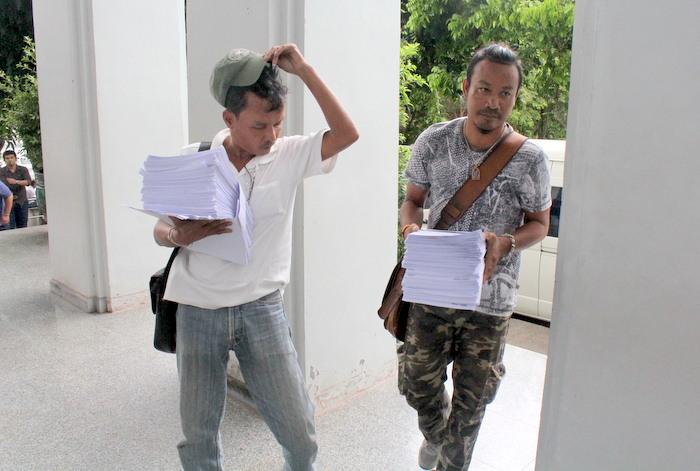 PHUKET: More than 200 of Rawai’s sea gypsies are named as plaintiffs in a civil lawsuit against Baron World Trade Co Ltd, for allegedly blocking access to their sacred ceremonial grounds.

The lawsuit, which was filed June 13, calls for 500,000 baht in reparations to the community, and is the latest development in the ongoing land feud between the sea gypsies and land developer Baron World Trade.

“We went to the court on Monday and we are suing Baron for troubling the community by blocking their access to the traditional site, causing the sea gypsies bodily injury and negatively affecting their livelihoods as fishermen,” Mr Pasit said.

However, last month, a group of about 100 sea gypsies gathered to stop the developer’s construction workers making a wall of boulders to block access to the ceremonial grounds. (story here)

“We have an appointment with the courts on August 15,” Mr Pasit said.

Baron World Trade representative Chatree Madsatun said he isn’t worried about the lawsuit and that he’s willing to see the sea gypsies in court.

“I have no idea why they are doing this,” Mr Chatree said. “We have the legal rights to the land. More over, at least nine of the sea gypsies are wanted by the Phuket Provincial Court for damaging our property. I pity them. Now, 203 of them will be the ones who pay the price,” said Mr Chatree.

“These human rights activists are using them as a human shield. If we win the case, the sea gypsies will pay, and how could they possibly have the money to pay for the lawsuit?” Mr Chatree said.

“This is a civil case. But if they sue us in a criminal case and we win, I will sue them back and they will be the ones who go to jail.”

Mr Chatree said Baron owns the rights to the land and will continue to build.

“We agreed to pause the construction because we thought we could broker an agreement with them, but that’s fallen through, so we’ll keep on doing our work, Mr Chatree said.

“The NGOs and human rights activists shouldn’t do this to the sea gypsies. Those people have no idea what they’re facing.”