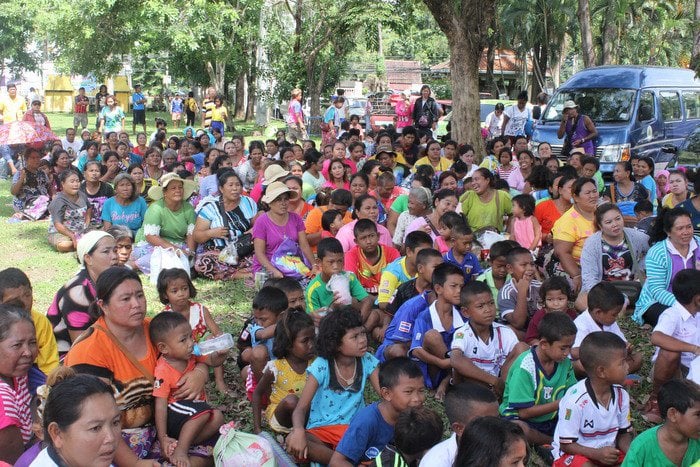 PHUKET: About 200 Rawai sea gypsies yesterday begged Phuket authorities for protection after a group of men allegedly threatened to shoot them if they moved concrete blocks that had been placed on the public access road to their village.

“Last month, a group of men put concrete barriers on the path between the beach and our village, which we have been using for more than 100 years,” said Sanit Sae-Chua, who led the group to Provincial Hall yesterday.

“We filed our first complaint on May 15, and then we removed barriers. Then, on June 20, about 20 men came back to put the concrete barriers on the path again.”

Mr Sanit said that the gypsies have removed the blocks before, but this time they faced threats from the men.

“This time they said, ‘Move the concrete and get shot’,” said Mr Sanit.

“We do not feel safe. Please protect us from these people. Send someone to measure the land and the beach so that no one can tell us that we cannot pass through the public land.”

“I will speak with Muang District Chief Supoj Chanakij, as well as the Chalong Police, and have the relevant authorities send security staff to the area,” Vice Governor Somkiet said. “I will also call the people who claim to own this land to question them about the incident.”

The Rawai sea gypsies have been fighting for many years to prove the rights to the land their families have been living on for generations.

Establishing long duration of residency is a key element in the gypsies’ fight against private investors who had won court orders to evict some villagers from the site (Video Report here).

Vice Governor Somkiet touched on this note and told the villagers that it takes a long time to review land right ownership cases.

“Everything must be done very carefully to ensure that it is fair,” V/Gov Somkiet said. “However, I will organize a meeting to discuss the land ownership problem as soon as possible.”

The sea gypsies dispersed yesterday after V/Gov Somkiet promised to send security personnel to protect them.

Last night, Civil Defence Volunteers went to the sea gypsy village to stand guard, the Phuket Gazette was told today by one of the volunteers.