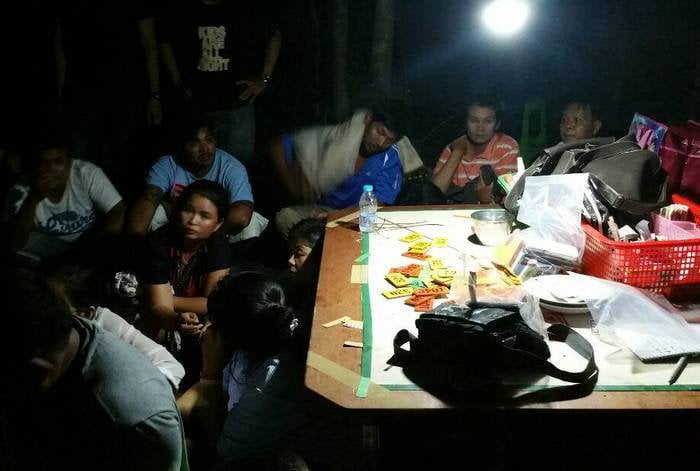 PHUKET: A couple of local officials were among those arrested during the raid of an illegal gambling den near Khao Naka in Phuket on Sunday night.

Kamala Tambon Administration Organization (OrBorTor) council member Sommai Kritsan and the village headman for Chalong Moo 1, Pradit Ongsantipap, were among the 26 arrested during the joint-police operation.

“We received a tip-off that there were a group of gamblers, so we organized a raid with Wichit Police and officers from the Crime Suppression Division,” explained Lt Col Prawit Engchuan of Phuket Provincial Police.

The site was about one kilometer from a rural road, forcing the officers to hike slightly before arriving at the scene.

“Some of them tried to escape, but we managed to apprehend them all,” Col Prawit said.

Officers found 196,150 baht in cash and gambling paraphernalia for the popular game Gung-pla (literally, ‘shrimp-fish’) at the scene.

“Mana Prasobpol confessed to us that he was the one who had organized the game,” Col Prawit said.

Mr Mana was charged for operating a gambling ring, while the other 25 were charged for illegal gambling.