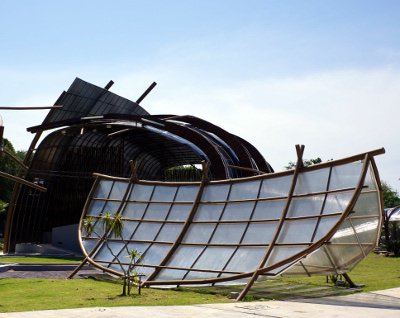 PHUKET: The long-anticipated Sea Gypsy Cultural Center, or Urak Lawoi Culture Center, is now scheduled to open toward the end of this year.

The inauguration of the facility is expected to happen about six months after it is officially transferred from the Phuket Office of Public Works to Rassada Municipality at the end of this month.

At a cost of 5.4 million baht, the Sea Gypsy Cultural Center being built at Baan Laem Tukkae village, claims to be the first of its kind in Asia and aims to both preserve the distinctive way of life and culture of the Urak Lawoi sea gypsies and attract tourists to Phuket.

The project was first announced in September 2009, with the Phuket Provincial Public Works Office placed in charge of constructing the facility on four rai of land. On completion, Rassada Municipality will take over the running of the center.

“Since the Cultural Center Sea Gypsy is located in the Rassada Municipality’s area of responsibility, operations will be transferred to us and we will manage and maintain the facility, as well as the displays in the center,” said Rassada Municipality Chief Administrative Officer (Palad) Dachakanee Leelanon.

“The Ministry of Culture Phuket office has only the budget for the construction work, everything else is down to us,” he added.

Just over 2mn baht of the funding was from the 2010 provincial budget, with the remainder provided by the 2010 Thai Khem Khaeng (Strong Thailand) financial stimulus package instigated by the former government under then-prime minister Abhisit Vejjajiva.

We are expecting responsibility for the center to be transferred to Rassada Municipality on May 28, Mr Dachakanee explained.

“Once the center has been handed over we can proceed to the next step, which is the preparation of the exhibition area,” he added.

Even though the building is up, there is still much to do to get the center ready to open.

“Once the center opens, people who want to learn about Urak Lawoi culture and their history can visit the exhibition for free. We will not charge any fees to enter the museum. We may just put a donation box there to help pay for the utilities, but the overall budget for the center will come from Rassada Municipality,” Palad Dachakanee said.

The new center being a tourist attraction is in line with plans of Rassada Mayor Phudit Raksaraj to rejuvenate the area.

“Koh Sireh has been neglected for so long, but Mayor Phudit has a plan to bring this part of town back to life. He wants to develop Koh Sireh into one of the important Rassada tourist attractions,” Mr Dachakanee said.

Other plans to promote Rassada as a tourist destination include developing the viewpoint on the hill behind Koh Sireh temple as a place for visitors to watch the sunrise; creating an artificial beach at Koh Sireh, similar to a project in Singapore; and installing a musical fountain in the sea.

“The musical fountain would be similar to the one the Phuket Provincial Administration Organization [OrBorJor] built [at Saphan Hin], except our musical fountain will be in the sea. No one else has done that before,” he added.

“We haven’t given much attention to this area before, but investors have seen the potential in Koh Sireh, as can be seen from the many hotel projects springing up around this part of town.

“I think it would be good for Rassada if we tried to promote Koh Sireh as a important Phuket attraction. This is the time for us to polish this previously neglected island, so it can be the ‘Pearl of Phuket’,” he said.