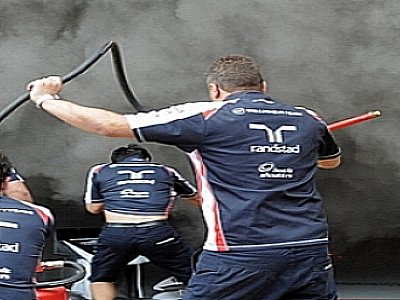 PHUKET: At Catalunya no driver has ever won starting lower than third on the grid, which makes it a boring race, right?

It was McLaren’s race to lose again. And they did – again!

Lewis Hamilton keeps winning on the track, and his pit crew keeps losing it for him. This is from a team renowned for its meticulous pit action.

The new crew must be under terrible pressure, but being demoted from pole to last place because someone failed to fuel him adequately to meet minimum weight conditions during qualifying is simply unforgivable. Hamilton gamely fought back from 24th place to 8th, ahead of Button who started in 10th, but one wonders how long he will stay at McLaren under such conditions.

But it was Williams’ day.

Venezuelan Pastor Maldonado was promoted from second to first on the grid because of McLaren’s blunder, and won his first ever F1 GP and Williams’ first since 2004.

There are rumors that Valtteri Bottas will take Bruno Senna’s seat alongside Maldonado next year, and that could make Williams formidable. It is great to see a privateer at the top again against all the works teams. The Williams’ victory was singed slightly by a post race fire in their garage, and Maldonado became a hero again by carrying out his young cousin, who was in a leg-cast. His car was safe in the winners’ enclosure, but Senna’s car was damaged.

There are two castes of F1 driver: those who get there entirely on talent, and those who are able to jump the queue somewhat by bringing with them sponsorship deals. The former drive for the biggest, richest teams, and the latter, derogatorily called “pay drivers” help the smaller teams. Pastor Maldonado is a pay driver, who brought US$47 million to Williams under a deal reputedly involving Hugo Chavez, so his victory must be very sweet. And Frank Williams must be very happy.

Adrian Sutil was a pay driver for Force India until he lost his family sponsors, and he is now looking for a non-pay seat. The rumors are that he is talking to Ferrari, who are openly expressing frustration at Massa’s continuing inability to score points.

Fernando Alonso got his Ferrari into second place and hounded Maldonado, to no effect, but is now joint top of the driver’s table. Lotus did do well, taking third and fourth places, but not as well as they hoped.

Red Bull was nowhere, and saw their lead eroded.

So it’s onto Monaco on May 27, where Michael Schumacher will have a five place grid penalty for hitting Senna. Monaco has the least overtaking opportunities of the F1 year. Qualifying is everything here, so the penalty is bad for Mercedes.

The race is on a narrow street course with elevation changes, tight corners and a tunnel, making it one of the most demanding tracks in F1. In spite of the relatively low average speeds, it is a dangerous circuit.

Monaco is the only GP that does not adhere to the FIA’s mandated 305 kilometers minimum race distance, with an actual race length 260.52km over 78 laps.
It stays a fixture because of its exceptional glamour and prestige.

The race will be shown live on the big screen at The Green Man at 5:30pm Sunday May 27, with qualifying at the same time on Saturday May 26.

Sea Gypsy Cultural Center to open in Phuket this year