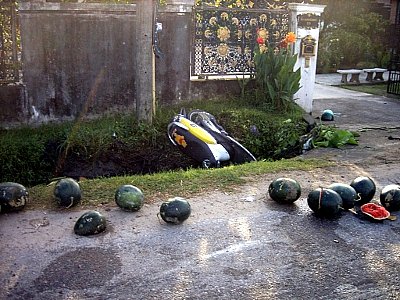 PHUKET: Police will pursue charges against the driver of a speeding pickup that crashed into a school van on Tuesday morning, killing two and leaving many others injured.

The driver, 41-year-old Nikom Kaewmanee, told police he was driving at about 100kmh when he tried to overtake the van, which had 15 occupants, Thalang Police told the Phuket Gazette .

The speed limit on the densely-settled stretch of road where the accident took place is 60kmh, according to the Highways Department.

Mr Nikom told Thalang Police he was in the passing lane when his vehicle was hit by the van. The impact forced his pickup onto the median strip, causing his vehicle to overturn.

However, police say that physical evidence from the scene make this version of events doubtful.

They will question surviving passengers as part of the ongoing investigation, Capt Pramarn said.

The third party to the accident, a woman on a motorbike, added little detail in the investigation, he said.

“She was not sure exactly what happened. She just felt something hit her very hard from behind and she fell into the roadside ditch,” said Capt Pramarn.

In the early morning hour when the accident took place there were no other vehicles in the immediate vicinity, he said.

At the time, there were not many vehicles on the road, and in the stretch of the road where the accident took place there were just Nikom’s pickup, the school van and the motorbike.

Police will wait until all of the survivors in the van are well enough to be interviewed before concluding their investigation and moving ahead with any further charges.

Mr Nikom has already been charged with reckless driving resulting in death, which carries a maximum of 10 years in prison or a maximum fine of 20,000 baht, or both.

In Thailand, police typically file charges against any driver involved in an accident, and then drop the charges if subsequent investigation finds they were not at fault.