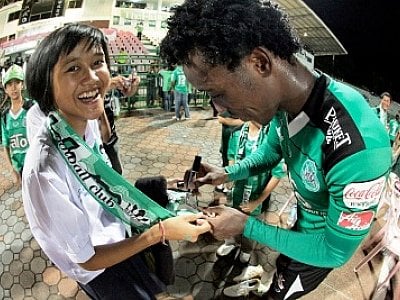 PHUKET: League Division One’s southern derby is sure to bring herds of fans to Surakul Stadium tomorrow, when a resurgent FC Phuket aim to tame the “Fighting Bulls” of Songkhla FC.

In addition to those travelling with the team, massive support is expected at the game from a huge population of Phuket residents who hail from Songkhla.

The fixture tomorrow was originally due to be played on April 6, but that game was cancelled due to regional flooding.

Songkhla are still hopeful of reaching the playoffs for promotion to Thai football’s Premier League. Currently in fourth position with 32 points, they are ahead of ninth place Phuket on 23 points.

Phuket got off to a strong start in their 2011 campaign, but a series of poor showings prompted former coach Surachai Jirasirichote to resign in May. He handed the coaching baton to Sompong “Rock Rhino” Wattana.

Sompong steadied the ship with an away draw against Air Force Utd, which was followed by his first home match, a memorable 4-1 hammering of Chainat FC.

Phukets’s Toyota League Cup opener drew them away against Thanyaburi FC and they returned with their season’s first away win and a clean sheet not seen since April 17.

Phuket will not have another league game until July 10 when they play Suphanburi FC at Surakul Stadium. This match may also see the return of Diarra Ali.

Kickoff for both games is 6pm.