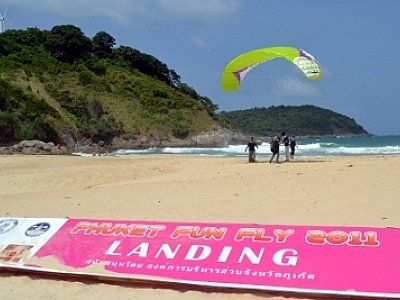 PHUKET: Paragliding enthusiasts assembled in Rawai for Phuket Fun Fly 2011 found the wind too strong this morning for pilots to safely get off the ground, but expect flying conditions to improve over the weekend.

“We still cannot glide right now because the wind is too strong. It is too dangerous,” said Sarayut Chinpongsatorn of the Thai National Paragliding Team.

“The wind speed right now is about 40kmh. We need wind speeds between 10kmh and 25kmh,” he explained.

“Looking at the weather forecast for the next two days, I think it will be great for paragliding,” he said.

“I’ve visited Phuket many times, but I have never tried paragliding here before. I came this year because I heard last year’s event was fun and many of my friends took part,” he said.

Mr Sarayuth, along with the six other men and seven women of the Thai national team, is currently in training for the 2011 Southeast Asian Games, to be hosted by Indonesia at the end of this year.

It will be the first time paragliding is included in the games.

Fun Fly 2011 was launched this morning with an official opening ceremony featuring a troupe of traditional Thai dancers at the windmill promontory overlooking Yanui Beach, the takeoff site for the event.

A total of 51 paragliders from countries including Japan, Germany, France, Malaysia, Sweden, Indonesia, and Iran are in Phuket to take part in the annual event.

Domestic entrants come from all regions of Thailand, with contingents from Lampang, Rayong, Bangkok and Chon Buri provinces.

“I have been living in Phuket for six years. This place is perfect for gliding this time of year and has a perfect area for spot landing,” he told the Gazette.

“I can’t explain the feeling. People should try it once. It’s an amazing feeling to be up in the sky without an engine, just playing with the wind,” he said.

Phuket Fun Fly is sponsored by the Phuket Gazette and PGTV.