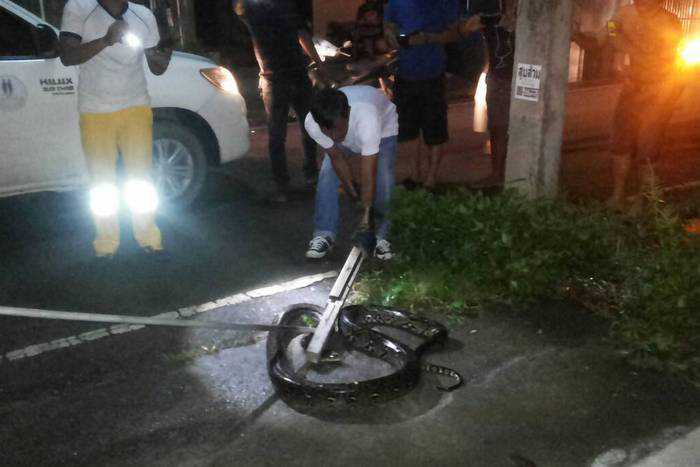 PHUKET: A frightened Phuket resident fearing for the lives of his neighbors’ pets called rescue workers to capture a 15-kilogram python that was attempting to escape into a drain early this morning.

Wuttikai Dartdean called rescue workers from the Kusoldharm Foundation and the local municipality to the scene – in a residential area west of the Heroines Monument in Thalang, central Phuket – at about 2am.

“I saw the python heading toward a drainpipe while I was riding my motorbike to the convenience store,” Mr Wuttikai told the Phuket Gazette.

“I freaked out and became afraid that the python would eat for locals’ pets, so I called for help.”

Rescue workers took about 20 minutes to catch the three-meter long python. They then took it to a nearby convenience store and found that it weighed 15 kilograms.

The workers kept the python at the Kusoldharm Foundation office in Muang Mai in Thalang last night, before releasing it into the jungle at Khao Phra Thaew Wildlife Sanctuary.