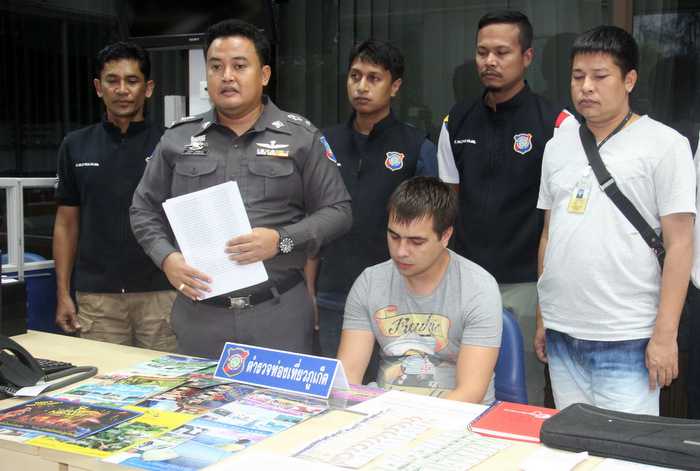 PHUKET: A man arrested on Saturday for illegally working as a Russian-speaking tour guide has been charged with attempting to bribe the Tourist Police officers who arrested him.

Dmitrii Pindiurin, 27, from the Kyrgyz Republic, was arrested at the Karon View Point at 10:30am.

“We were on the lookout for illegal guides when three foreigners arrived,” said Sen Sgt Maj Surin Pitphan of the Phuket Tourist Police.

“One of them was talking and explaining the place. That’s when I suspected that he was an illegal guide.”

Sgt Surin identified himself to the trio as a police officer.

“The two foreigners with Mr Pindiurin said he was selling tour and travel packages in Phuket and that he was in the middle of conducting a tour he sold to them on November 3,” he said.

“Mr Pindiurin confessed that he was working illegally. We searched his car found Russian-language travel brochures.”

While the officers were placing him under arrest, Mr Pindiurin offered to pay them 40,000 baht to let him go, Sgt Surin alleged.

“Our officers played along, saying that the money had to be paid at the police station. They did that so the act of him offering the officers money could be recorded on the station’s CCTV cameras,” he said.

With the alleged bribe recorded at the Karon Police Station, the officers charged Mr Pindiurin with attempting to bribe an official under Section 144 of the Thai Criminal Code, which incurs a fine of up to 10,000 baht, up to five years in jail, or both.

The cash offered was seized as evidence.

Mr Pindiurin was also charged with illegally working as a tour guide, an occupation that is reserved for Thais by law.

Save the pooches: 15-kilogram python captured in Phuket