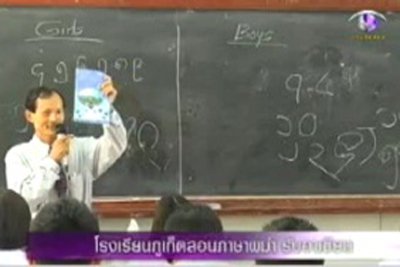 PHUKET: In the next three years, the ASEAN Economic Community (AEC) will come into force, and the region’s languages will be as important as English.

A school on the resort island of Phuket in Thailand’s south has been providing Myanmar language classes to its high-school students.

Secondary students at Satree Phuket School in the provincial seat are paying special attention to the Myanmar classes to improve their language skills.

Myanmar language studies as a foreign language course offering were added to the curriculum last year, in addition to English and Chinese.

The school’s deputy director Nattawat Pathairatanaserani said the course wasn’t very popular when it was first launched due to some negative attitudes toward learning such a language.

However, when Myanmar started to open up its country to the world, parents started to encourage their children more and more to attend Myanmar classes.

“In 2015, we have to be a part of the AEC. So we should learn other ASEAN languages. As the programme is a success, this year we have a full class of students attending the course, from only half a class last year,” Nattawut said.

Two days a week, students get to practice reading, writing, and speaking skills with a native teacher. The class ambiance is lively.

Students said studying the Myanmar language is more necessary in a tourist destination like Phuket, as there are more and more Myanmar workers moving to the island.

Using the language for communication is for better understanding of the Myanmar people, and it will be a good foundation for careers in the future, as well as a good preparation for the AEC.

“There’re a lot of Myanmar people in Phuket. Do I like it? Yes, because I can get to speak with them in their language,” student Seri Rongluen commented.

“We say ‘Nei kaun la?‘, which means ‘How are you?’, and they will answer ‘Kaun ba deh’, meaning ‘Yes, I’m fine.’ The classes we take are very practical. When we talk to Myanmar people in their language, they are happy, smile and will ask how did we learn it,” student Nantaporn Wutticharn said.

Apart from the Myanmar language, Satree Phuket School plans to begin teaching a curriculum for the general public and to aim at teaching the Malayu and Indonesian languages in school to prepare the students with language strength so that they can compete with the foreign workforce overseas who will be coming to Thailand once the AEC takes effect.