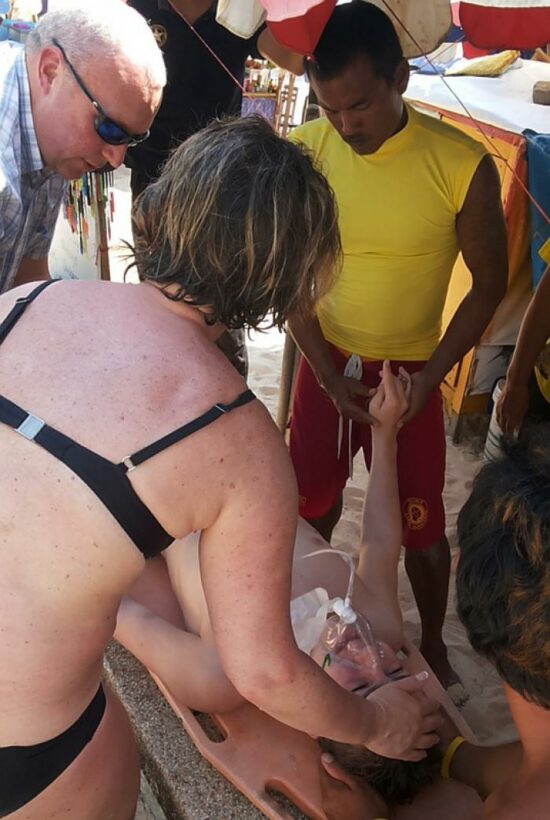 PHUKET: Large swells and changing seas at Nai Harn Beach have led to a recent spate of rescues, said Prathaiyut Chuayuan of the Phuket Lifeguards.

“The swell is big and people need to be aware,” Mr Chuayuan said.

One of the recent victims of the rough seas at the popular Phuket beach occurred at the same time the marine safety initiative Safer Phuket (story here) was handing over an Automatic External Defibrillator (AED) to Nai Harn lifeguards.

One of the world’s leading defibrillator manufacturers, Zoll, who supplied the AED, had a representative on hand to assist in the rescue.

The victim, a teenager who was in trouble after a collision with his surfboard, was spotted by lifeguards.

Within seconds, he was ashore and receiving treatment from Zoll’s representative, Ryan Cooper, an American firefighter and trained paramedic, a media release stated.

“We are very happy that our efforts had such a quick impact. We will soon be announcing sponsorship deals with Quiksilver and Bangkok Hospital so we believe that soon Phuket Lifeguards will be able to be much more effective,”Safer Phuket founder Duncan Stewart said.

“The Phuket Lifeguard Club was involved in around 1,000 incidents in 2013, but it continues to need support and aid. Safer Phuket is a social enterprise that is supporting their transition into a lifesaving force that is the equal of any in the world,” the statement said.

The support of local lifeguards is only one of many Safer Phuket Projects. The other projects focus on beach management; the development of a coastal waters safety summit; training and regulations; water quality; and search and rescue.

The Phuket Gazette and PGTV are founding sponsors and proud media partners of Safer Phuket. For more informoation, visit saferphuket.org or facebook.com/saferphuket.