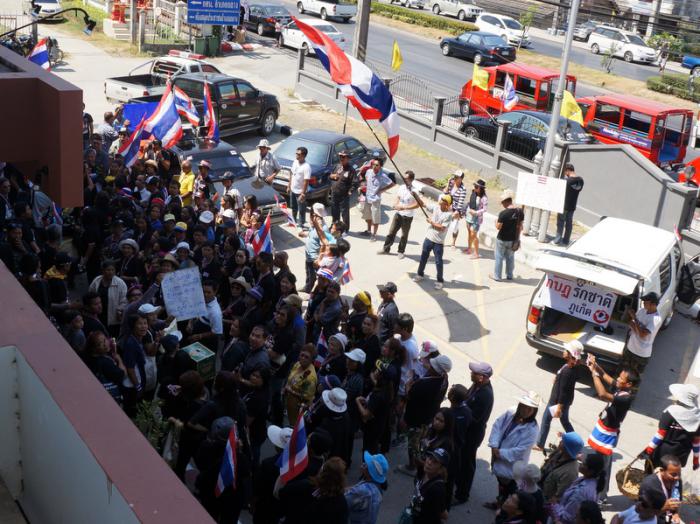 “We will be there with no fear,” said Mr Suratin after receiving the summons on Wednesday. “We are pure in our intentions not to harm anyone except the corrupt government body.”

Lt Col Yongyuth Krongmalai of the Thalang Police, joined by Thalang Police Superintendent Sirisak Wasasiri, read out the charges to the suspects yesterday.

“On February 1 at 4pm and February 2 at 3pm the protest leaders led about 300 people to block the entrance of Thalang Police Station. Their intention was to prevent officers from transferring election equipment out of the station (story here). The protesters also did not allow the Phuket Election Commission (PEC) officers to effectively perform their duties.”

“The suspects are charged with obstructing the election and obstructing law enforcement officers. They have denied the charges,” said Lt Col Yongyuth.

The complaint that led to the election obstruction charge came not from the PEC but from Jirayus Songyos, the only candidate able to penetrate the anti-government blockade to register as an MP candidate in Phuket.

By stopping the election (story here), the protesters prevented people from voting for him, he said, so he authorized his assistant, Withiwat Kulsiriitthikorn, to file a complaint against the accused on his behalf.

All five men were allowed to return home yesterday.

“All five have a permanent address, job and show no signs of planning to flee or interfere with evidence. Therefore, the investigation team has agreed to release them without posting collateral,” he added.

The protest leaders must appear at the station again on March 18 at 10am, when the case will be handed from the police to the public prosecutor.