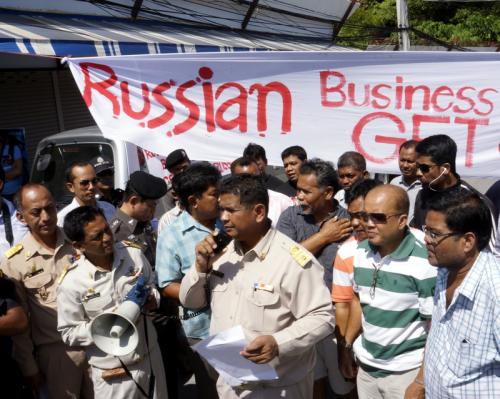 PHUKET: The Commerce Ministry is targeting 56 companies in Phuket suspected of breaching the Foreign Business Act (FBA) by having Thais acting as nominees so that foreigners can hold majority control.

Most of the suspected companies are owned by Russian interests, and are involved in food and beverage trading, and financial agencies, he said.

The Business Development Department will deepen its investigation into all 56 companies by questioning their directors and examining documentation. If any of the businesses have committed offences, their cases will be forwarded to state agencies for prosecution, he added.

Among the 56 suspected companies in Phuket, 24 firms have been set up this year and are not yet operating, 13 conduct a business listed in Annex III of the FBA, eight have not cooperated in the investigation, and three companies failed to respond when contacted by the authorities.

The stringent investigation of businesses that could breach the FBA is aimed at creating a standard for doing business in Thailand, and to prevent companies from benefiting from legal loopholes in conducting forbidden businesses that are protected for Thais only.

The act prohibits foreign interests from holding more than 50 per cent of some types of businesses, such as telecommunications, rice milling, property development, media and services such as retail and wholesale.

However, some foreigners have used Thai nationals as nominees to operate such prohibited businesses.

The businesses listed in Annex III of the FBA cover those in which Thais are deemed not yet ready to compete with foreigners.

News of the crackdown follows Tourism and Sports Minister Somsak Pureesrisak last week seeking assistance from the Department of Special investigation (DSI) headquarters in Bangkok in curtailing what he called “mafia gangs” operating in Phuket.

DSI chief Tarit Pengdith has ordered a task force be assembled, who are expected to arrive on the island next Thursday to to carry out raids and arrest illegal taxi drivers and foreign business operators found breaking the law (story here).

Deputy Commerce Minister Natthawut said that as Phuket is a popular tourist destination, the ministry would closely work with the Tourism and Sports Ministry and the DSI to ensure that the inspection of companies did not negatively affect tourism and business sentiment.

He added that the government would continue to investigate firms in other provinces to ensure fair practice for all.

The names of companies in these provinces alleged to have violated the FBA have been passed on to the DSI and for punishment under Lands Department laws.

DSI called in to tackle taxis and raid foreign businesses