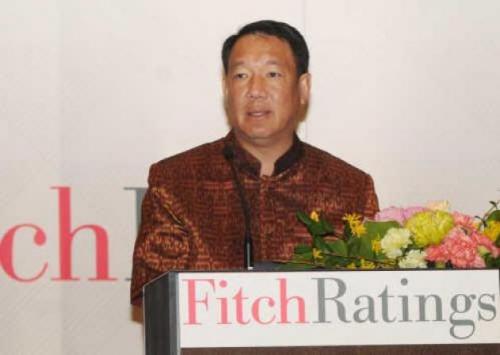 Following discussions yesterday with Fitch Ratings, Kittiratt agreed with the agency that lowering corruption in the public sector could boost the Thai economy, while saying that the government will improve the standard of living of civil servants to lower the possibility of corruption. “Most people see corruption as coming only from politicians. Actually, we have to tackle corruption from [state] officials working with people, too,” he said.

“The government does not intend any injection [of funds]. Tourism generates income for Thailand and also plays a vital part in the country’s economic balance,” Kittiratt said.

The government will attempt to accelerate its expenditure to boost the economy, he said.

Meanwhile, the global credit rating agency, Moody’s Investors Service, recently surveyed Thai commercial banks for its evaluation report to be launched soon, even as the Bank of Thailand expressed confidence in the high provisions and strong capital base of Thai banks.

Ruchukorn Siriyodhin, the BOT’s assistant governor for Financial Institutions Policy Group, said that Moody’s, in the past two weeks, had met the Thai central bank and asked for information pertaining to commercial banks in Thailand.

“Usually, Moody’s releases reports twice a year. The March report concerns countries. The August/September report relates to banks. There may not be particular concerns this time, given general questions,” Ruchukorn said.

Thai commercial banks have a strong capital base with high provision for doubtful debts and periodic stress tests, she said. The stress tests take the easing of the US stimulus into account.

The BOT has informed all commercial banks to prepare credit valuation adjustment risk (CVA risk) for derivatives transactions, based on Basel III or Basel III CVA requirements, according to a BOT source who did not want to be named.

It was insufficient for damages that may arise from over-the-counter derivatives if commercial banks hold capital adequacy for credit default risks only,” he said.

The CVA risk report will be made with information at the end of June, September and December 2013.

Although a dozen people were hurt, at press time only two had been admitted to Rat Yindee Hospital. The cause of the fire was yet to be determined.

Songkhla governor Kritsada Boonrat said it took three hours to put out the fire. Damage was initially estimated at Bt100 million and he said authorities would bring in an engineer to inspect the structural damage.


Arrest warrant issued for ex-monk
The Nation / Phuket Gazette
PHUKET: The Criminal Court has issued an arrest warrant for Wirapol Sukpol, an ex-monk formerly known as Luang Pu Nenkham, on three charges with a 10-year statute of limitations running from July 2, 2013 to July 2, 2023.

Department of Special Investigations (DSI) chief Tarit Pengdith said the three charges were: violating the Computer Crime Act by allegedly posting false information on the Net to raise donations; statutory rape of a minor under the age of 15; and taking the minor away from her parents/guardians.

He said since these charges had a 10-year statute of limitations, his agency had up to a decade to hunt the ex-monk down.

Tarit said the DSI would notify the Office of National Buddhism to get the Centre for Monks and Novices’ Foreign Travel Control to push for the revocation of Wirapol’s passport. He added that the DSI had already contacted the United States and European countries to revoke the suspect’s visa.

Saying the DSI knew exactly where the ex-monk was now, Tarit said that Wirapol would be flushed out of hiding anyway once his passport and visa are cancelled. He added that DSI officials were ready to travel to the relevant country to pick him up, a process that should be completed in no time.

Tarit also warned the ex-monk’s followers to not make any moves that might be construed as obstructing the authorities or the course of justice. They have also been warned against tampering with evidence or witnesses, with the threat of serious legal action.

The DSI has notified 141 financial institutions as part of the process to seize the ex-monk’s assets and alerted the Land Office to freeze all transactions under Wirapol’s name. The Land Transport has also been told to seize cars bought in the suspect’s name, he added. Tarit went on to say that some temples and monks had given up the cars they had received from Wirapol.

Pol Lt-Colonel Kornwat Panprapakorn, chief DSI investigator in charge of the Northeast, said he would travel to Ubon Ratchathani today (July 18) to meet the people who had provided information about another 10 cars reportedly bought by Wirapol.

Kornwat said the DSI investigation team had also learned that Wirapol might be the owner of three Rolls Royce cars, as some photographs had been found of the vehicles parked in the garage of the ex-monk’s temple – Wat Pa Khantitham. He warned that the people who had received cars from the former monk and failed to return them, or were caught hiding them, might be charged with embezzlement, which is a criminal offence and an anti-money laundering law violation.