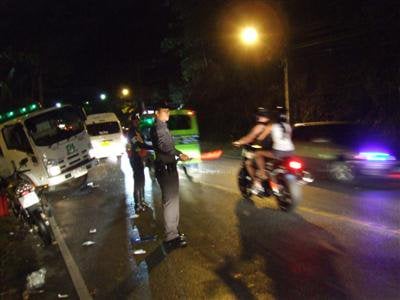 PHUKET: Four Russian tourists on their way to a Phuket magic show got a painful dose of reality on Thursday night, when the passenger van they were riding in collided with a delivery truck south of Patong.

The accident happened at about 7pm on Wiset Road in front of Le Meridien Phuket Beach Resort on the first day of the nationwide Seven Days if Danger road safety campaign.

A security coordinator at the resort told the Gazette that one of his men witnessed the accident.

The driver of the delivery vehicle, heading towards Karon to transport goods to a Super Cheap convenience store, lost control when he had to slam on his brakes to avoid rear-ending a six-wheeled truck ahead of him, the guard said.

The truck swerved across the center line and hit the passenger van, reportedly en route to a performance of the Danze Fantasy magic show on Soi Bangla in Patong.

The van came to rest in the middle of the road, while the truck, with two Burmese workers in the back, went off the road and slid into a roadside ditch near the hotel entrance.

The fourth Russian involved in the accident turned up at the hospital later for treatment of minor injuries.

Both Burmese workers were also treated at Patong Hospital. One required stitches for a laceration near his mouth and the other was treated for multiple bone fractures after he was thrown out of the vehicle.

The minivan driver and four Russians were later transferred to Bangkok Hospital in Phuket Town.