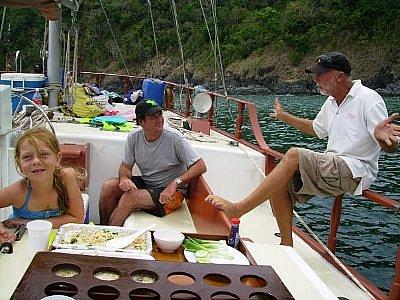 PHUKET: Friends of long-term Phuket expat Leslie Beasley, who was found dead on a yacht moored in Chalong Bay on December 23, have told the Gazette about their shock and sadness over the local sailor’s death.

Mr Beasley was looking after the yacht for the owner, who is currently overseas. His body was discovered after the owner had repeatedly failed to contact him about the condition of the yacht, explained Brent McInnes of the Phuket Cruising Yacht Club.

Mr Beasley was found dead just three days before he was to celebrate his 69th birthday. Police deem the death a suicide, though the circumstances surrounding it have sent unnerving ripples through Phuket’s yachting community.

Mr Beasley’s body was found with a hose from an oxygen cylinder connected to a plastic bag placed over his head.

Tom Howard, who runs cruises out of Phuket on the the renowned 100-year-old Danish schooner Seraph, told the Gazette, “I was shocked to hear what had happened. He worked for me for nearly two years. He was a good guy, a hell of a guy.”

“Les lived on Phuket for at least seven years. He was a yacht caretaker and had done work as a boat surveyor. He had also worked as a delivery captain, making numerous Atlantic and Indian Ocean crossings,” Mr McInnes said.

“He used to come in once a month. He pretty much kept to himself. He wasn’t a gossip monger, but he wasn’t a recluse.

“He was a very helpful guy, always friendly,” he said.

“Les was my neighbor for a time and I was fortunate to sail with him on a few occasions,” said Justine Bristow.

“I’m not sure how he was with his male friends, but with me he was always a true gentleman. Gentle, knowledgeable and passionate about the ocean.

“I can’t actually believe this has happened, but I’m sure that this was not some spur of the moment decision as he always struck me as a very thoughtful and purposeful man,” she said.

“I talked to him just the other day. He wanted to tie up his dinghy in front of the yacht club. I said he could just pull it up onto the beach and we’d keep an eye on it, but he said, ‘I think I just don’t have the strength to pull it [back] off the beach,” said Mr McInnes.

Reports from throughout the local yachting fraternity indicate that Mr Beasley may have been suffering from a long battle with pancreatic cancer.

“He was an all-round good guy. It’s sad. I think he just came to the end of his tether,” Mr McInnes added.