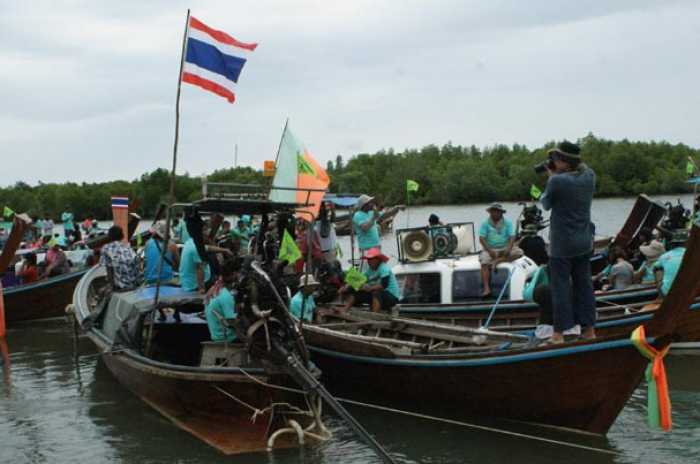 PHUKET: Local fishermen in Krabi have joined the fight against an 870-megawatt coal-fired power plant to be built in the province’s Nua Khlong district, east of Phuket.

A horde of boats carrying angry villagers congregated at the Baan Klong Ruo pier in Nua Khlong at about 10:30am yesterday, wielding large signs that read: “Protect Krabi from coal-power plant” and waving green flags picturing dugong calling for “No coal”.

The fishermen were especially opposed to a coal seaport at the pier as part of the power plant project, the Phuket Gazette was told.

“About 102.12 square kilometers in this area are wetlands which are protected under the Ramsar Convention [story here],” Alee Channam, leader of the Krabi Kon Rak Lay (Krabi Sea Lovers) Club told the Gazette.

“We cannot allow the power plant to be built. Using coal as a power source will affect the environment and our way of life, which depends on fishing. It is also possible that the area would be removed from the [Ramsar] wetlands preservation list.”

The protests vowed they would not stop until the Electricity Generating Authority of Thailand (EGAT) halts the project.

“This is just the beginning. If the EGAT stays on track with the project, we will continue to protest. It will not just be us; everyone who is against the plant will stand up,” said Mr Alee.

“Even though EGAT has been sneaky about the project, especially in their public hearings, we will not give up.”

Another group of protests gathered last month, where the first accusations were made that EGAT’s public hearings were a farce and that locals were not being heard (story here).

In September, the Koh Lanta Tourism Association claimed that EGAT had been dishonest with locals (story here).