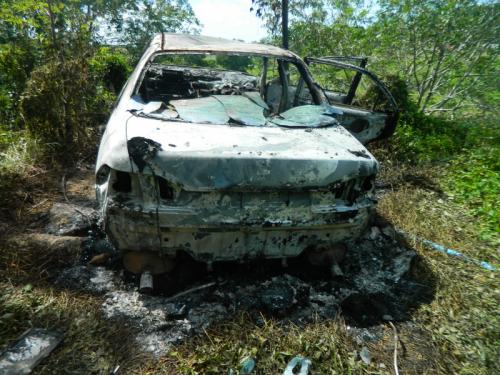 PHUKET: A Russian man’s car erupted in flames early this morning after he accidentally veered off a road and hit a concrete water tank in the hills near Phuket’s famed Big Buddha, in Chalong.

Maxim Kasutin, 27, was on his way to a friend’s house at about 1:30am when he missed a curve in the darkness, explained Capt Patiwat Yodkwan of the Chalong Police.

“Fortunately, Mr Kasutin was able to get out of the car while it was on fire,” he said.

Mr Kasutin’s relatives informed police of the accident at about 7:30am.

He was on his way to visit a friend who lives on Soi Baan Klang, about a kilometer from Soi Yodsanae.

But, as the relative explained, because of the darkness Mr Kasutin lost his way and drove into the forest about five kilometers from Chao Fa West Road.

Capt Patiwat said Mr Kasutin was even luckier than it would appear.

“The car stopped about one meter before a 10-meter drop,” he said.

“Mr Kasutin was not at the scene when we arrived,” Capt Patiwat added.

“Right now we believe that Mr Kasutin was simply lost. However, he might have been drunk at the time he was driving. We need to call him in and question him further,” he said.