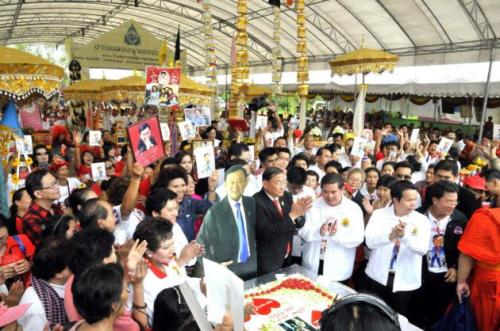 PHUKET: Fugitive former prime minister Thaksin Shinawatra may have been in Beijing, but his figure was standing right there next to Deputy Education Minister Sermsak Pongpanit as he lit and blew out candles on a 29-kilogram cake to celebrate the former leader’s 64th birthday yesterday.

In a brief phone-in at the event, Thaksin said Thais had no choice but to rely on one another to solve the country’s conflicts.

Meanwhile, many Pheu Thai MPs flew to Hong Kong yesterday and more were to follow today to deliver their birthday wishes in person.

Hundreds of people flocked to Nonthaburi’s Wat Kaew Far to join the event, while hundreds of others held similar events in their home towns.

In a five-minute video clip posted by Thaksin’s son Panthongtae on Facebook yesterday, Thaksin is heard calling on people to trust one another to help solve their problems.

“Brothers and sisters, I care for Thailand. There are many things that can be fixed but haven’t been fixed because of doubts and distrust owing to the conflicts. If we turn towards each other, we can achieve reconciliation in the country.

“We talk like Thais, in our language, when we discuss the core of the problems and how we can solve them together. If we focus on our country, I’m sure it will become prosperous again,” he said.

Thaksin recalled that he was overthrown when he was 57, and though he returned briefly when he was 59, he had not returned since.

He said the benefit of his exile was that he was able to see the world and learn new things. He promised to share his new knowledge on Facebook when he returns to Dubai.

He went on to say that he missed his family, but commended his children for visiting him often so he is not lonely.

Up to 50,000 cards, depicting a caricature of Thaksin along with a message written in his own hand, were handed out along with a “reconciliation dessert”, which came in the form of red and white intertwined pastry.

“I thank my Thai brothers and sisters for not having forgotten me. I would like to see peace return for the future of our descendants and the country.

“I hope to pass on happiness from all corners of the world to each and every Thai,” the message on the card read.

Thousands of people gathered at temples nationwide to make merit on Thaksin’s behalf and wrote birthday wishes on a long, white cloth that will be taken to the former leader as a present.

In Chiang Mai, the Rak Chiang Mai 51 group hosted an event titled “64 Years: The Good Man of the Country” to toast the birthday boy at the Warorot Grand Palace Hotel.

In Nakhon Ratchasima, red-shirt supporters prepared a 4.5kg cake to mark the event.

In Udon Thani, Pheu Thai MPs along with 500 supporters attended a merit-making ceremony at Wat Thip Santiwan, where up to Bt65,000 was raised in donations.

Red-shirt leader Kwanchai Sarakham was unable to attend because he had a court appointment, though his wife arranged a similar event at another temple.

In Trang, which is a Democrat Party base, a few hundred red shirts from that province and adjacent ones gathered at the Rose Inn to celebrate Thaksin’s birthday.

PHUKET: Customs officials in Koh Samui have arrested two Indian nationals for allegedly smuggling more than 12 kilograms of the illegal drug crystal methamphetamine, known on the street as “ice”.

The illicit haul of drugs found in the possession of the suspects is estimated to be worth Bt43 million.

Deputy Finance Minister Benja Louicharoen announced the arrests of Virdi Hardev Singh, 51, and his accomplice Puran Singh, 41, who said they had flown from India to Singapore and then to Koh Samui where the illicit drugs were discovered in their luggage.

Initial investigations suggest the two were allegedly hired to deliver the drugs to a contact in Koh Samui, who would then arrange for the massive stash to be delivered to Bangkok.

Between October last year and July this year, the Customs Department said it had confiscated more than 73 kilos of crystal meth-amphetamine, over 8,000 kilograms of heroin and 260,000 meth-amphetamine tablets,

According to the department, more than 92 drug suspects have also been arrested over the same period.

BRN behind a few of the Ramadan attacks: study
The Nation / Phuket Gazette

PHUKET: A study claiming that the Barisan Revolusi Nasional (BRN) is so far responsible for a few of the 20 insurgent attacks during the holy month of Ramadan was cited yesterday by National Security Council secretary-general Paradorn Pattanathabutr during a seminar in Bangkok.

According to the study, a number of incidents have been proved to be conducted by the BRN, which is currently in peace talks with the Thai government. Other insurgent groups were allegedly behind the other 15 incidents cited in the study, though Paradorn did not identify the groups allegedly involved at the seminar, which was organised by the Royal Thai Navy.

During his presentation, Paradorn said the BRN had readily admitted to him that it was responsible for the latest bomb attack in Narathiwat on Wednesday. However, he said the insurgents’ umbrella group claimed it had not intended to harm ordinary citizens. Two government teachers travelling by car were killed by shrapnel in the roadside bomb blast, which is thought to have been laid to ambush a military vehicle that was also in the area.

Navy Captain Somkiat Pholprayoon, who also spoke at the seminar, said there were about 2,900 insurgents among the 1.8-million Muslim population who live in the deep South, while another 400,000 were Buddhists. He said the majority of Muslims in the region wanted to be part of Thailand.

General Ekkachai Sriwilas, a senior official with the King Prajadhipok’s Institute, cited several internal conflicts around the world that had had positive outcomes, including the unrest in Northern Ireland, which took 26 years to end, and the seven-year insurgency in Aceh, which had also ended favourably.

Meanwhile, a number of new notices have been erected by insurgents in Narathiwat calling on military units to withdraw from outposts in the deep South. Two fake bombs were also reported at two locations where notices had been placed. Security forces said they believed the notices were erected by the same group who posted 38 notices in eight of Narathiwat’s 13 districts on Monday. Police said they were trying to track down the source of the paints used to make the signs.

A network of government teachers based in the deep South yesterday condemned the Wednesday attack, saying the two female teachers were truly dedicated to their professions. Their absence would result in a drop in educational standards at the school where they taught, the network said.

Nineteen schools in Chanae district where the bomb attack took place have closed and will reopen on Monday.