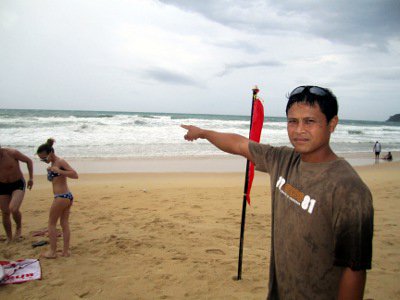 Uten Singsom, head lifeguard at Kata-Karon, told the Phuket Gazette that the 33-year-old entered the surf near the Thavorn Palm Beach Resort at about 1pm yesterday.

The deceased was later identified as Denis Korobogatov.

“He and his two Russian friends came from Patong. Before he went to swim, they paid for beach chairs and ordered some food from a beach vendor. Right away he went to swim in the red flag zone while his friends remained on the beach,” explained Mr Uten.

As soon as Mr Korobogatov entered the surf he was caught in a riptide. Two lifeguards rushed to rescue him.

“But it was not easy because of the current. It took five minutes to get him back to the beach,” said Mr Uten. “We did CPR for 20 minutes and he threw up a few times. I expect he had been drinking, as we could smell alcohol on his breath.”

The Russian was rushed to Vachira Phuket Hospital in Phuket Town, where he was pronounced dead on arrival.

Drinking alcohol and entering the surf in a red flag zone is an extremely dangerous combination.

Wearing a long-sleeved shirt and trousers to enter the surf, as is common practice among Thais, also adds to the risk of drowning, Mr Uten said.

He appealed to all tourists to follow the rules at all beaches for their own safety.

One expat resident told the Gazette of his own experience in the same area where Mr Korobogatov drowned.

“That section of Karon Beach, offshore between the Hilton and Thaworn [sic] resorts, is the nastiest rip I have ever encountered. When I moved to Phuket about 10 years ago I used to swim at Karon every day, sometimes doing the entire length of it and then walking back. I consider myself an expert sea swimmer and I have been caught in riptides many times. Usually I just remain calm and don’t try to fight it, swimming parallel to the beach.

“One time as I was passing through that rip, the water was moving so fast that it was mixed up with sand and air bubbles. It didn’t have the buoyancy for me to float in, so I went under and panicked. I got out alive, but it really terrified me.

“I had never experienced anything like that and never want to again. My advice to everyone is to keep away from that area during the monsoon season, no matter how highly you rate your swimming ability,” he said.

The swimmer explained that he calls the rip the “Thaworn Rip” not only because it is located offshore from the resort with the same name, but also because thaworn means “permanent” in Thai and the rip is a permanent feature of Karon Beach for much of the monsoon season, he said.