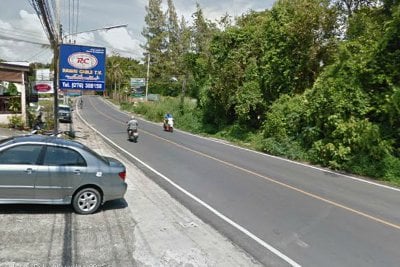 PHUKET: A young athlete from Bangkok, scheduled to return home after competing in the Phuket Games rowing competition, died in a tragic motorbike accident in Rawai this morning.

Chalong Police confirmed the identity of the victim as Sutthipong Laphutama, aged 18.

The driver of the motorbike, 13-year-old Atthapong Noikhamsin, was rushed to hospital for treatment of serious injuries.

The driver of the borrowed Honda motorbike lost control of the vehicle coming down a steep, curved section of the Baan Rawai – Baan Nai Harn Road, near the Rawai Cable TV office.

The bike hit a wall and Mr Suttipong, who was riding pillion without a crash helmet, died of massive head trauma, said the police.

Police questioned the boy’s team manager Payoong Sammarat, who told them that all of his athletes were under strict orders not to ride motorbikes during their stay in Phuket.

Like many other athletes in the rowing competition held in Nai Harn Lagoon, Mr Suttipong was staying at Nai Harn Temple.

Bottles of drinking water were found scattered at the accident scene, possibly indicating that the boys had gone off to buy water.

UPDATE: Mr Atthapong suffered a broken left collarbone and is being treated at the Phuket Provincial Administration Organization Hospital. Doctors there said he suffered no other serious physical injuries.

NOTE: Subsequent reports from police and other provincial authorities name 18-year-old Sutthipong Laphutama, who died in the accident, as the person who was operating the motorbike when the accident occurred. This initial report, identifying 13-year-old Atthapong Noikhamsin as the driver, is based on comments from an eyewitness and Traffic Police officers at the scene.